From the Random House Dictionary:

An Anti-Idiotarian no longer. 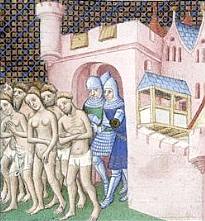 It’s a sad day here at Gates of Vienna. Sometime in the last twenty-four hours, Charles Johnson removed us from his blogroll — his list of “anti-idiotarians” — at Little Green Footballs.

I remember how thrilled Dymphna and I were when we first appeared on Charles’ blogroll. We were still a miniscule blog back then, and being blogrolled by Jihad Watch, LGF, and Wretchard made us as starry-eyed as giddy teenagers.

We’ve become somewhat jaded since those days, but it’s still a sad moment.

I’ve written quite a bit over the last few months about the tendency within the Vast Right Wing Conspiracy to pronounce anathema on one another. If you support the Iraq War, or don’t; if you use the term “moderate Muslim”, or object to it; if you describe the EU as “Eurabia”, or refrain from it: each of these is enough in certain circles to get you bound and cast into the outer darkness. The emotional rhetoric surrounding these excommunications is phenomenal, and people’s energy is sucked into reviling one another instead of fighting the common enemy.

I’m not going to address the specific content of the controversy over Vlaams Belang and Sverigedemokraterna here. We (CVF, that is) have spent the last week or so compiling substantive information, some of which has already been posted at the CVF blog (scroll down) , and other materials from the Brussels conference are available at Counterjihad Europa. Everyone will be free to look at the available information and make his or her own judgment, as I did when I was in Antwerp and Brussels.

One of the unavoidable aspects of building an action coalition is that — assuming you want to be successful, and not simply doctrinally pure — you must form operational alliances with groups or people that you don’t agree with on everything. Any successful politician, academic, or group leader has to do the same.

There is a thousand times more evidence suggesting that U.S. Senator Robert Byrd is a neo-Nazi than there is for Filip Dewinter. But I would ally myself in a heartbeat with Sen. Byrd were he — fat chance — to resolutely oppose the Great Jihad.

Robert Spencer got the largest burst of applause when concluded his after-dinner speech at the Counterjihad Summit in Brussels with these words:
– – – – – – – – –

One thing I would ask in appeal, in conclusion, is that we avoid what has been called the narcissism of small differences. There are many different ways, different strategies, that we may have, and I find altogether too often that we have this tiny group of people who are aware of the problem, and yet we’re sniping at one another — I’m not speaking of the people in this room — but sniping at one another, and tearing one another down because we don’t have exactly the same program as the other guy.

Well, there’s not time for that. And we need to set aside our own differences, and unite.

This is not the first fight that’s been picked with Gates of Vienna. People occasionally want to fight with us, but as long as they seem to be basically on the same side, we refuse to fight back. We’ll continue to link and support them, despite being reviled by them, and not expect gratitude or reciprocity. We’re in the middle of a crucial and deadly war, and expecting gratitude or reciprocity is a trivial self-indulgence.

I have great respect for Charles Johnson. He has done mighty service on behalf of the Counterjihad. He’s still on our blogroll, and will remain there; I recommend that you visit Little Green Footballs every day so that you can keep up with what’s going on.

Since the start of this kerfuffle, Charles has been banning commenters from LGF. Some of them have been coming over here to discuss what happened, and they are all welcome here. We don’t ban commenters — Blogger doesn’t give us that option, even if we wanted to — and I won’t delete any comments simply because I don’t like them, or disagree with them. As Zionist Youngster said recently:

On my own blog, ever since I first formulated my commenting rules after having my comments deleted on Daily Kos, my policy has been to never delete a comment only because I dislike its content. Feelings of offense are not a legitimate reason to delete comments or ban writers (online) and speakers (in real life). I don’t take this nonsense from anyone — from any political orientation, nationality or religion.

It’s the same at Gates of Vienna: you are entitled to express your opinion. But newcomers should know that there are rules about how you express your opinion here; comments should be civil, temperate, on-topic, and show decorum. To be more specific:

These guidelines have encouraged comment threads that are a delight to read, even when I disagree with some of what’s said. We are blessed with intelligent and well-informed commenters, and a distinct lack of trolls.

This has been a nasty business, and I don’t intend to comment on it any further. We will, however, be discussing Vlaams Belang, Sverigedemokraterna, the BNP, and various other anti-jihad political parties in Europe. We’ll examine the available information, draw conclusions, debate with our readers, and sometimes change our minds.

But no one will be excommunicated for supporting one or another of these groups. No one gets pushed away for having a different opinion.

We’ve been expelled from Paradise. We’ll win our bread by the sweat of our brow, as we labor East of Eden against the Great Jihad.

But we’ll do it together.

71 thoughts on “The Narcissism of Small Differences”