As Larwyn reported last night, CNN aired a piece about Lars Vilks which showed the Modoggie artist walking to his supposedly safe house and going in the front door. Tonight, over at Hot Air, Allahpundit reports that he has the video clip, and some additional details:

But here’s the strangest part, which isn’t clear from the Gates of Vienna post: Vilks is aware that they’re filming him in front of the two houses. It’s not some stock shot of the door and the light fixture; it’s him, entering the building, with the camera right in his face. Unless CNN led him to believe that they weren’t filming or weren’t going to use the footage, and there’s no reason to think that they did, it was all done with his willing participation. Which, given the bounty placed on his head by Al Qaeda in Iraq and the verdict of Swedish police that he’s not safe at home, makes him one recklessly special idiot.

Throughout the broadcast the name of the Swedish town was displayed at the bottom of the screen, so Mr. Vilks is either extremely brave, or has some way of keeping himself safe that we don’t know about.

CNN showed an earlier drawing by Lars Vilks that Christians might find offensive, depicting Jesus engaged in a sex act. The network blurred the offensive part out of deference to Christian sensibilities, and when the time came to show a Modoggie, they did the same thing for the Muslims, rendering almost the entire drawing invisible:
– – – – – – – – – 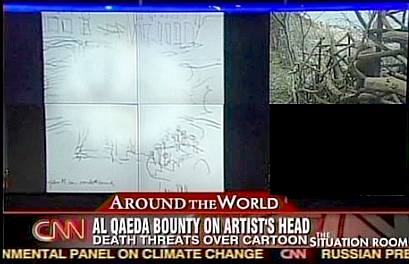 The blurred-out drawing shown above is the one that first appeared in print in Sweden, in the newspaper Nerikes Allehanda. You can see the full image at right in situ, which we have here thanks to the quick thinking of Carpenter, who scanned it and sent it to us on August 22nd, the day it hit the newsstands.

But this wasn’t the first Modoggie to appear; there were plenty before the one printed by Nerikes Allehanda. This one was #6 of the drawings I collected, and I didn’t borrow all of them. As I predicted, the trouble didn’t start until a Modoggie found its way into the MSM. Ever since then that particular one, #6, has continued to be the focus of Islamic outrage and the attention of the Western media.

I can’t improve on the conclusion that Allahpundit draws from this whole affair:

See what’s going on here? After the disgraceful western media blackout of the Danish cartoons, CNN obviously felt it had to make some gesture towards showing the viewers the offending work. But not only didn’t they have the balls to show the offending part, they were sufficiently worried about being accused of, ahem, “Islamophobia” for the part that they did show that they went ahead and put up the drawing of Christ — which has nothing to do with the threat to Vilks — just to prove that they’re equal opportunity offenders.

So they blur out a Rondellhund drawing, but they prominently display the name of the town that Lars Vilks is “hiding” in. Three cheers for journalistic integrity!

Last night, in the comments on our Lars Vilks post, Profitsbeard referred to CNN as the “Caliphate Now Network”.

3 thoughts on “The Modoggies and Caliphate Now Network”