A Russian booster rocket has lifted off from Kazakhstan today, and will carry a Malaysian orthopedic surgeon into orbit:

A Russian rocket blasted off from a launch facility in Kazakhstan on Wednesday, carrying an American, a Russian and a Malaysian to the international space station.

The Soyuz-FG rocket soared into a darkening sky above the Kazakh steppe.

Aboard were Peggy Whitson of Beaconsfield, Iowa, who will be the first woman to command the space station, veteran Russian cosmonaut Yuri Malenchenko, and Dr. Sheikh Muszaphar Shukor, the ninth Muslim in space but the first from Malaysia. They will arrive in two days.

Dr. Shukor’s mission at the space station presents special problems, not only because he is a Muslim, but also because he will be in space during the holy month of Ramadan. To conform properly to his dietary restrictions and other rituals will require some tricky calculations, procedures which are not necessary for most Muslims.

Fortunately for Dr. Shukor, a special guidebook has been prepared by Islamic theologians to instruct him about his behavior in space: 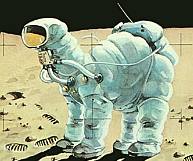 Malaysia has come up with the world’s first comprehensive guidebook for Muslims in space as its first astronaut prepares to go into orbit next week.

The book, entitled Guidelines for Performing Islamic Rites at the International Space Station, teaches the Muslim astronaut how to perform ablutions, determine the location of Mecca when praying, prayer times, and how to fast in space, the Star newspaper reported on Saturday.

“The reason we formulated guidelines for Muslims in space is because we wanted to ensure our astronaut could fully concentrate on his mission, without having to worry about how he should perform his religious obligations in space,” Abdullah Md Zin, a minister for religious affairs, was quoted as saying.

The 18-page guidebook will be translated into English, Russian, Arabic and possibly more languages for the benefit of future Muslim astronauts, he said.

The 34-year-old Malaysian has said he will try to observe as much of the Muslim fasting month of Ramadan in orbit as possible. The lunar month, during which Muslims fast from dawn to dusk, is due to end around October 13.

An interesting side note about Dr. Shukor’s trip into orbit concerns the deal that Malaysia had to cut in order to get him aboard the spacecraft:

The $25 million agreement for a Malaysian astronaut to fly to space was negotiated in 2003 along with a $900 million deal for Malaysia to buy 18 Russian fighter jets.

So the Russians get the big bucks, the Malaysians get some cool planes, a Muslim doctor goes into orbit, and everybody’s happy.

17 thoughts on “Submission in Space”