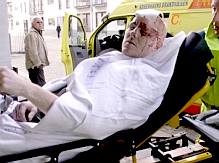 The Danish counterjihad organization SIAD planned a demonstration in Copenhagen last Sunday and announced it in advance. As a result, several of its members were waylaid and viciously attacked, in what may have been attempted murder. Here’s an excerpt from the report at the SIOE blog (WARNING: the photos accompanying the story show bloody injuries, and may be disturbing):

Anders [Gravers, the leader of SIAD] was driving and followed the security car down in a parking cellar to park so the cars would be in a secure place before the demo.

He drove very slowly down because apperently there was very little space in the hight for the van. The driveway is very steep and is divided by concrete pillars. Because of the delaying, the driver of the security car got out of his car to open the metalgate again because it was closing after 30 sek. so we could enter the cellar. He directed the van forwards close along the pillars and directly in front of a big concrete pillar supporting the cellar roof.

2-5 sek. after there was a loud bang and the frontwindow was damaged. About two autonomous looking types were in the front and two on ecah sites smashing the site windows shouting Get him out get him out! and started hitting Anders and the SIAD passenger in the other site with ironbars. The SIAD member in the middle (foto) was hit of a thrown filled soda bottle in her backhead.

Anders succeded after a while to kick one of the autonomous hard in the face as he leaned in to unlock the door. Anders mananged to get out with a fire extinguisher from the van and hit another one hard on the shoulder. It remained later that they attemted to stab him down when there was found cut holes in the shirt, jacket and vest. Anders was wearing his securityvest which saved his life.

Suddenly they disappeared and Anders got around the van and saw a SIAD member (foto top) lying on the floor while he was beaten in the head of 4-5 persons with ironbars. Apperently they also tried to stab him down, but again he also wore his security vest which saved his life.

Suddenly someone screamed RUN RUN and they disappeared up the steep driveway. The elderly woman was lying on the floor completely still. She had been in the security car and got out immediately when the driver shouted OUT OUT. She didn’t know what to do and started running. She was hunted down by two persons and banged down with an ironbar. She lay completely still in the hope she wouldn’t get anymore. She felt they stood a moment watching her if she would move. Then they presumably ran to the other SIAD member on the floor and joined the attack on him.

I’ve met Anders Gravers, and I can picture him laying into the anarchist thug. Good for Anders!

The attackers, referred to here as “autonomous”, are presumably from the Danish affiliate of Antifa, “Antifascist Action”, the international alliance of anarchist organizations which is active throughout Europe.

This incident highlights one of the risks of planning such a demonstration — you need and want publicity so that people who support you will turn out, but this also tells your enemies exactly when and where they can find you.

Read the rest of the story at the SIOE blog.

Our thoughts and prayers are with the members of SIAD who were attacked, and with their families.

32 thoughts on “SIAD Attacked by the Autonomer”