Finally, Vladimir Putin is getting in line with the EUSSR. He’s going to establish an institute in one of the European capitals that will be dedicated to monitoring human rights violations in Europe.

Ol’ Vlad could more appropriately do this at home, but you know how it is when the issue of your neighbors’ sins comes up for discussion. Their flaws are so easy to see from the outside…

According to the EU Observer: 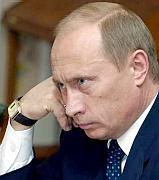 Russian president Vladimir Putin has suggested setting up a Russian-funded institute in Brussels or another European capital to keep an eye on human rights issues in Europe.

“With the aid of grants, the EU helps develop such institutes in Russia,” Mr Putin was cited as saying by Reuters, after an EU-Russia summit on Friday (26 October).

“I think the time has come for Russia, given the growth in our financial capabilities, to make its contribution in this sphere as well”, he added.

“This is not going to be a joint venture,” Mr Yastrzhembsky said, underlining “the institute will be monitoring the situation in Europe concerning rights of ethnic minorities, immigrants, media and such”.

There was apparent confusion around the content of the Russian idea, with Portugal’s prime minister Jose Socrates saying “we received president Putin’s proposal of a Euro-Russian institute dedicated to promoting human rights in the two blocs [Europe and Russia] with satisfaction”.

Mr Socrates, as host of the event, hailed the meeting as “constructive” and said it led to “significant steps toward building a deeper relationship between the EU and Russia” but there was little agreement on substantive issues.

The two sides were unable to bridge their differences on the future status of Kosovo — the breakaway Serb province, with Russia continuing to take a pro-Serb line on the issue having earlier this year blocked a UN plan granting substantial independence for the province.

In addition, talks on a new partnership deal between the two sides were not kicked off, even though the current Partnership and Cooperation Agreement (PCA) expires at the end of this year.

And there are other pricklies between Europe and Russia:

There was also no major breakthrough in the field of energy co-operation, a contentious issue for Europe which is heavily reliant on Russia for gas and oil supplies.

Both sides agreed “to keep working to develop a mechanism for early warning on [potential problems with] supplies of energy from Russia to the EU and demand for it”, Russian president Vladimir Putin was quoted as saying by Interfax.

Vlad’s also unhappy with US plans to deploy missile shields in Poland and the Czech Republic.. He said it was analogus to what the USSR did in Cuba in the 1960’s, which led to the Cuban missile crisis.

In this case, the USSR is no more, and despite Putin’s yearnings, it can’t be resurrected. Nor is America the same entity it was during John Kennedy’s time. Now that the KGB files have been opened, the question of Russia’s involvement with Lee Harvey Oswald’s assassination of Kennedy is gaining more traction…

I love the irony of Russia wanting to supervise anyone’s human rights violations. They wrote the book on violating people.

15 thoughts on “Mac the Knife”