Fjordman has written several times about Karita Bekkemellem, Norway’s Minister of Equality. A dyed-in-the-wool feminist, she is dedicated to the advancement of “equality”, and wields a power to enforce gender equity that American feminists can only dream of.

Last night a Norwegian reader sent us the following email:

Norway is truly a totalitarian state. The Government are going to dissolve highly successful companies which do not meet their — the leftist Government’s — ridiculous quota of a 40% female representation of board members.

They give the Nobel Peace prize to Al “Göbbels” Gore, and they have now blatently started to meddle in the internal affairs of the country’s business comunity.

He’s referring to this story from Aftenposten: 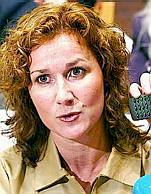 Norway’s center-left government has issued a warning to 140 companies that still don’t have enough women on their boards of directors: Appoint more, or be dissolved.

Government minister Karita Bekkemellem intends to enforce Norway’s law requiring that at least 40 percent of the boards of stocklisted companies be made up of female directors.

Companies organized as “ASA” corporations are required to meet a state-mandated quota that calls for 40 percent of their directors to be women.

The quota was ushered in during the previous center-right government coalition, and has been enthusiastically embraced by the current Labour Party-led government.

Equality minister Karita Bekkemellem told newspaper Aftenposten on Friday that those companies failing to meet the quota will face involuntary dissolution from January 1. Many are within traditionally male-oriented branches like the offshore oil industry, shipping and finance.

Among the firms targeted on Bekkemellem’s list are some fairly large companies including Det Norske Oljeselskap ASA, securities firm Carnegie ASA, Awilco Offshore and Frontier Drilling. Some of the stocklisted companies have no women at all on their boards of directors, including DNO, Ocean Rig, PetroJack and Teco Maritime.

“My advice to them is that they take responsibility and find the women they need,” she said. She called the law “historic and radical,” and said it will be enforced.

Considering that they’re subject to this kind of government meddling in business, Norwegians should be glad that their country has North Sea oil. Nothing else in Norway is likely to be turning a profit for the forseeable future.

3 thoughts on “Gender Equity in the Boardroom”