Here are the scheduled speeches, which will be available online at heritage.org:

The tour is to promote Thomas’ book, My Grandfather’s Son, which is currently #16 on Amazon and #1 on the New York Times listing.

This book dovetails nicely with Fjordman’s ideas in his recent post about fatherless children, because Justice Thomas had a “father” of biblical proportions: his maternal grandfather, Myers Anderson. His biological father, referred to as “C” in the book, never supported his children and it is obvious that Justice Thomas does not think he deserves much mention (though C was permitted to attend the festivities surrounding Clarence Thomas’ investiture into the U.S. Supreme Court).

Thomas’ mother, whom he called Pigeon, raised him and his brother Myers in Pinpoint, Georgia, after their father abandoned his family, leaving for Philadelphia. Eventually, seeking work, Pigeon moved to Savannah – the Negro section of Savannah, of course – and after the idyllic days of his early childhood, Clarence found Savannah lonely and cold. He often went hungry and had little supervision while his mother worked.

Pigeon must have asked her father and stepmother, Christine, to take the boys in though Clarence was never privy to that conversation. The grandparents agreed to do so with the provision that it would be a permanent move. As his grandfather explained to him later, he could not have borne it had the boys been taken away after they settled in. 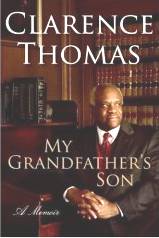 Grandfather Anderson was a proud, hard-working man who owned his own business delivering fuel, and owned his own home, which seemed incredibly rich to the young Clarence and Myers after their life in Pinpoint and the cold apartment in Savannah.

However, Grandfather was not something out of “Father Knows Best.” He was tough, demanding, and sometimes physically abusive in his effort to make something of his grandsons. Nonetheless Clarence loved him and pined to be loved in return. Years later, when his grandfather would play with Clarence’s own son, Jamal, Clarence would ask why his Grandfather could never show that kind of tenderness to him and his brother Myers. His grandfather explained what many grandparents have said down the ages: I can do this because I don’t have the responsibility for raising him like I did you.

Justice Thomas never says so, but one gets the impression that his grandfather was afraid his grandsons would turn out as shiftless and irresponsible as had their father, C.

Myers Anderson had converted to Roman Catholicism in the 1940’s and his grandsons attended the parish school, Saint Benedict the Moor. [I must say here that I was unusually motivated to buy Thomas’ book – not to hear his side of the Anita Hill imbroglio (though I did discover what a sleaze ball Joe Biden was) – but because I had known the sisters who taught him at St. Benedict’s and I remembered how they suffered through the hearings and then triumphed when he was finally passed by the Senate].

The nuns (as Thomas says, mostly Irish immigrants) were the Missionary Franciscan Sisters of the Immaculate Conception. He particularly mentions Sister Virgilius, who was my aunt’s friend and colleague in the Franciscans. In the North, they wore the brown habits of Franciscans everywhere, but in the brutally hot South, their habits were white, though I doubt they were much cooler. Don’t forget, those days in the early fifties had no air-conditioning.

In addition to teaching, Virgilius was also the principal. In the book, you can see her standing proudly with his graduating class. I have countless such pictures of my aunt, Sister Celine, standing with “her” children, and some photos of her and Virgilius and Angelica, and all those other young women who left the cool climate of Ireland to dwell in the hell that is Georgia in the summer. I often wondered how they did it. Aunt Celine was plagued with heat rashes from the weather. Even on Tybee Island, where she was the principal, the ocean breeze was not enough…

If his overbearing grandfather, whom he calls “the brooding omnipresence of my childhood and youth,” formed his character then the Franciscan nuns of Saint Benedict sealed it. From them he learned in no uncertain terms that all people are equal, black and white alike. Since he lived in a sea of black faces, it was easy to believe at the time. Further south, being taught the same lesson by the Sisters of Saint Joseph, and living in a sea of white faces, I believed that message, too, with my whole Catholic heart.

Both of us had many hard lessons to learn on the way to reality, but Clarence Thomas’ education was much tougher and more full of the subtle hatred of cloaked racism directed at him than I ever knew. I was only called “Nigger-lover.” He got to experience the whole thing.
– – – – – – – – –
After St. Benedict’s, Justice Thomas attended Pius X High School, and in 1964, he attended a vocation weekend put on by the diocese. He tentatively decided he wanted to try for the priesthood. With Grandfather Anderson, though, you didn’t “try.” You finished the job. It proved to be Daniel in the lion’s den for Clarence.

His tutoring in the ways of the white world begins in the seminary, where he labored over Latin in order to catch up with the other boys. He was initially one of two Negro seminarians, though the other boy did not return the following year. Here Clarence learns for the first time what it is to be alone.

By way of a preface, he relates:

It may have been a blessing in disguise that I didn’t know what I was letting myself in for by going to a white school. Blacks in Savannah rarely came into contact with whites, and when we did, the encounters were usually brief and not too unpleasant, since our second class status was so firmly accepted that no unpleasantness was needed to enforce it…

I had no notion of what would happen if I dared to leave the comfort zone of segregation and test the uncharted waters of the larger world.

This is the turning point in the book. Everything that follows after – his education at the seminary (where white kids kept breaking the head off his Saint Jude statue and he kept gluing it back on – it eventually was permitted to retain its head and followed Thomas all the way to his chambers in the Supreme Court. As any Catholic knows, there is irony in that story, for St. Jude is the patron of hopeless cases), his undergraduate years at Holy Cross after he left the seminary, his law school days at Yale – a school he grew to hate – all of this is based on those fateful years at St John Vianney. After the lessons of Sister Virgilius, et al, who assured the children that all of us were created equal, Justice Thomas was not prepared for the white waters of higher education in America. It was a long, dangerous ride.

If for no other reason, read the book to discover Justice Thomas’ journey from radical liberal to moderate conservative. That is another lonely journey for a Negro in America. Even his grandfather, with his belief in the good intentions of the Democrats who would guard the fate of the Negro, couldn’t follow Clarence into the outer reaches of darkness where Thomas Sowell dwelled.

The biographical content of this book makes it a good story, very hard to put down. But the intellectual journey is the heart of the book and I wish he had spent more time there. However, it must have been difficult enough to gather together the threads of his life and weave them into a coherent tapestry. One can’t have everything, though I hope there is a sequel to this tale, one that puts his spiritual journey from the depths of his solitary drinking through the rebirth of his Christian faith as he went through his ordeal in the Senate hearings – what he correctly termed “a high tech lynching” – into a deservedly larger perspective.

Now, as his grandfather did for him, he and his wife are raising his great-nephew. Justice Thomas gets to do for him what he so longed to receive from his Grandfather: reassurance that he was loved and welcome. May that experience heal his heart.

For Americans of that generation (Thomas was born in 1948) his life will echo the sounds of their own experience. Some will hear it as music, some as betrayal. But whatever else it is, Clarence Thomas’ voice is a clear recollection of a life lived as well as he could – always through a glass darkly, but struggling for a vision of something better.

As for my dear Sister Virgilius, the last address I had for her was the Franciscan retirement home in Newton, Massachusetts. There is a picture in the book of her hugging Justice Thomas at the reception, but we see only her back. All those good Irish women are gone now. I miss them very much. They sure knew how to laugh and the laughter made you join in.

A story remains to be told of the Roman Catholic nuns who taught Negro children throughout the South. Their quiet voices, repeating the idea of equality, were more formative than all the marches of the ‘60’s. In fact, without their tutelage, the fight for civil rights would have been much less sure than it was.

I hope some historian even now is collecting the archives the old nuns have preserved for future generations.

9 thoughts on “"An Omniscient, Brooding Presence"”