Yorkshire Miner, a regular commenter at Gates of Vienna, sent us this report of his visit to Brussels on Tuesday. He also supplied many photographs, some of which I have included here. 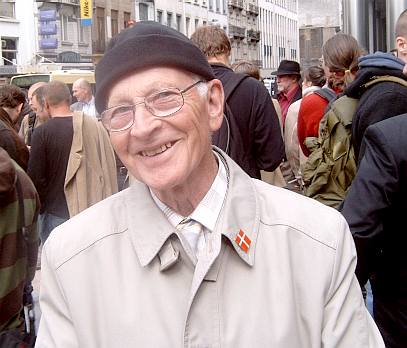 – – – – – – – – –
I had though our destination was to have been Luxembourg Square. Based on what I was told that was the starting point for the demonstration. On the walk to Schuman Plaza several of Vlaams Belang gave us tips concerning what to do if we were arrested: basically name rank and serial number. In addition we were to demand that any proceedings be held in Dutch. I was extremely curious as I expected a quiet demonstration. It didn’t seem to be in anyone’s interest to have things turn violent. This would be especially true from SIOE point of view.

The walk took about twenty minutes. Along the way, we observed signs of heavy police preparations. They were down every side street, quiet and unobtrusive. When we arrive at Schuman Plaza which was shortly after noon, the demonstration had already started.

The police were out in force. I saw two water cannons and countless police vehicles in the side streets leading off from Schuman Plaza. There were also several buses on hand, conspicuously prepared to remove the demonstrators. We stationed ourselves on the central reservation, no more than twenty yards from the demonstration. There was plenty of press in attendance; I saw at least one from Al-Jazeera.

The atmosphere was quiet and orderly. I certainly didn’t observe any real tension in the air at that point. You could walk through the police ranks, and it was obvious they quite outnumbered the demonstrators. Aeneas and several others stationed themselves just to the left of the main demonstration and unfolded their flags while Flyboy and I went through the crowd taking photos. By then, Filip Dewinter had arrived; he was walking through the crowd, shaking hands.

I cannot say what triggered the conflict; the police simply starting arrresting people. While that started a mêlée there was no serious fighting, I didn’t see anybody throwing punches. It was if somebody had a countdown and just pressed the start button.

You could still go through the police lines and take photos and you were certainly not molested. While this was happening, Aeneas and his small band, who were standing about five yards from the main group of demonstrators, were ushered to one side. It was obvious then that the police weren’t interested in detaining members of SIOE.

Paul Belien, in the mean time — complete with stetson — was quietly standing on the central reservation about fifteen meters from the bus that members of Vlaams Belang were being herded into. With each person thrown onto the bus, the police presented all the news camera with great photo opportunities.

Flyboy and I made our way back to Paul to show the pictures we had taken. We wanted to know what would most likely happen to those being arrested. He said that Belgium has a system of preventive detention. This is a sort of revolving door: they keep you in detention for seven to twelve hours and then release you without charging you with a crime. He said that Vlaams Belang had lawyers ready and had contacts in the police force.

The following ten minutes were very interesting. Luk Van Nieuwenhuysen, the deputy speaker of the Flemish Parliament, turned up disheveled but certainly not worse for wear. He was one of the demonstrators who had been manhandled into the bus. He gave me his card. He had escaped by climbing out of the emergency exit. No attempt was made to re-arrest him and we were no more than ten to fifteen meters from where they were manhandling the rest of the demonstrators into the buses. Then another gentleman came up to Paul. If I remember correctly his name was Demol and he was very well dressed. Paul introduced us to Demol, who turned out to be a former police commissioner, though now he is a Euro MP. Paul told me that Demol had been fired for doing his job arresting wrongdoers. (Having had a brother who had been a detective in the police for thirty years, in addition to a good friend who retired a couple of years ago as a chief inspector in England, I have a fairly good idea about how the police work).

Shortly afterwards things died down. Our group had reassembled, and with Paul in the van decided to go to Luxembourg Square to the other demonstration — a ten minute walk from where we were. As we neared the square we met Exile and several other gentlemen, one of whom was the press officer for the UKIP. It is funny I recognized Exile immediately and it was like meeting a long lost friend. Flyboy and I told the Press Officer that we had some good pictures of the demonstration. It was then decided that we should up load them to his computer so that he could sort out the best for their Blog. It took a while and things got rather complicated. To cut a long story short, forty-five minutes later, resplendent with name tags and photos we went up to the offices of the UKIP in the E.U. Parliamentary Building. Their space overlooked Luxembourg Square. Luxury offices, tight security and a gold plated expense account is the way I would describe it. Down below you could see the Danish and the British contingent standing around with a few police vans in the square. We joined them after the photos were uploaded.

It was nice to meet the Danes and the Brits. By all accounts things had gone off very quietly. Everybody seemed to gravitate to the terrace directly over from one of the entrances to the E.U. Parliament. The atmosphere was friendly as people moved from group to group introducing themselves. I even got a chance to practice my very rusty Danish. I was surprised by the reaction when I introduced myself as Yorkshire Miner: many people said how much they had enjoyed my comments on you blog. Thank you, Baron, for allowing me to bask in the shadow of your fame.

I met Anders Gravers and Steven Gash, I liked them both. Both speak well in front of the camera. I met Yggdrasil the Philosopher; we chatted for about thirty minutes — an interesting young gentleman. Anders and Steven went to a press conference later in the afternoon though they seemed to have been edged out by Vlaams Belang; Anders was certainly not pleased about the turn of events. They decided to continue their conversation privately. One of the Flemings who was with the party arranged for us to use the back room of the restaurant. As you well know most Danes and Brits are not teetotalers. Large quantities of excellent Belgium beer was consumed during the rest of the afternoon and early evening. I said my farewells about 8 o’clock and wandered back to the central station to catch the train to Genk where I had left my car. I arrived home about midnight.

Since starting this letter early this morning I have been trawling through different sites and I am even more sure now that my first impressions were correct: Vlaams Belang hijacked the demonstration for their own political ends. I found an interesting video with Bart Debie, whom I recognized as the person we went to see at the Flemish Parliament. In the video you can see him riding in the back of a chauffeur driven car while talking on the telephone. He was the picture of the perfect business man — suit, white shirt, and tie. The footage cuts to him as he walks into Anders’ hotel carrying a large bulging briefcase. He meets with Anders, shaking hands. Anders makes a statement and then the camera follows Debie walking out, talking once again on the telephone — busy, busy, busy, making even movement look like work.

He certainly wasn’t wearing that shirt and tie when we walked up to the demonstration together. Then he had on a Stop the Islamisation of Europe tee shirt. Perception is everything.

Demol, who I mentioned earlier turned up in another video giving an interview. In fact he was Johan Demol, the legal adviser for Vlaams Belang. I felt like a very privileged fly on the wall.

I don’t remember if I mentioned that I spoke and understood Dutch to anyone, I don’t recall doing it. I usually answer the people in what ever the language they address me. When I accompanied those who went to the Flemish parliament, we spoke English, Since the Flemish spoke English to us, I naturally answered in English. Of course I understood perfectly all that was being said. This also gave me an advantage while talking with the Danes and the Brits at Luxembourg Square. While my spoken Danish is exceedingly rusty, there is very little Danish I cannot understand. It was only later that it dawned on me that my receiving antennas, ears, had been operating in three language modes, while my loudspeaker had been functioning in mono, (English). I think it definitely gave me an advantage over most people there.

It was what I think you Americans would call a learning experience.