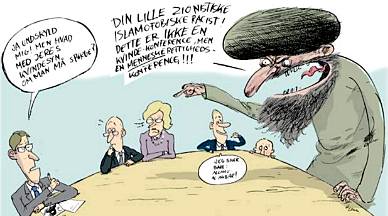 Top left balloon (UN): Sorry, but what about your treatment of women, if I may ask?

Muslim: You little Zionist Islamophobic racist! This is not a women-conference but a HUMAN rights conference!

The following article appeared yesterday in the Danish newspaper Berlingske Tidende. It has been translated into English by our Danish correspondent Kepiblanc:

In parallel with the war on terror and fundamentalism a fierce battle is going on in the UN. A battle the West is losing, says Canadian law professor Anne Bayefsky. Last year Denmark was rejected as a member of the council.

When Anne Bayefsky participated in the 2001 UN Conference on Racism in Durban she and many others were shocked. The conference touched on neither the situation for women and minorities in Arab countries nor the massacres in Congo or Durban — or any of the other catastrophes in the world. No, most of it was about how Israel treated the Palestinians, and the conference adopted a slew of resolutions against Israel and the USA. The two of them left the conference in protest while the delegates from all European countries and NGO’s — Danes included — stayed and put a good face on it.

The Durban conference is only one example of the war inside the UN, where the Arab countries together with a host of third-world countries have an absolute majority and conduct the war. In the UN Human Rights Council a slew of the most murderous regimes sit in the place of honor and see to it that the majority of the council’s resolutions are turned against Israel and that nobody ever investigates what’s going on the in the dictatorships. Some observers considered Durban a turning point because it marked the new offensive by Muslim countries that will culminate at the next Durban Conference, scheduled to take place in 2009. Here, says Anne Bayefsky, the Muslim countries will settle accounts with Western countries’ freedom of speech and once again criticize Denmark for the Mohammed cartoons.

Anne Bayefsky is better suited than most to follow this battle because she, as a law professor, followed it for several years — resolution after resolution. On her homepage, www.bayefsky.com, she documented what happened in the UN regarding UN resolutions and ballots. Her homepage became a success since it started in 2002, registering more than 500,000 hits.

Do you consider the Durban Conference a new offensive by fundamentalism?

“Not only a sign of a fundamentalist offensive, but furthermore a proof of the degeneration and corruption of the human rights movement. In reality we see a coalition between many Western human-rights organizations and oppressive regimes who launched this show without any Western organizations protesting.”

What could they have done?

“They could have interfered a long time in advance of the conference. This kind of conference doesn’t come by itself. You’ll have preparations, and it was absolutely obvious what was about to happen, namely a condemnation of Israel and the USA. Accordingly Israel was compared to Nazi Germany in several contexts. Everything was prepared, and it was absolutely clear that the Arab countries had kidnapped the conference well in advance of it actually taking place.”

In the end Israel and USA walked out of it. Should the European countries have followed?

The Durban Conference was the first in a series of conferences on racism. Preparations for the next conference in 2009 are already under way, and in articles all though the world media Anne Bayefsky has warned that the next conference will be even worse than the first. Now the objective isn’t only the USA and Israel, but the Western World’s freedom of speech, including Denmark’s. According to Bayefsky, Europe has already given up:

“The EU is an extremely weak construction and can in no way withstand the deluge of hate which manifests itself in the UN and its various organizations, especially on behalf of the OIC. The EU’s passive strategy is evident in ballot after ballot. They look at the numbers and realize that Western countries are the minority. They make a show of resistance, then fold and join consensus, as happened in Durban.”

And all this is happening right now?

“Yes, it’s going on right now. During the November UN Assembly a resolution about the continuation of Durban was put forward. USA and Israel voted against it while the EU vacillated, but promised to support it if only Durban II became a confirmation of Durban I and nothing else. But that agreement was an empty promise and the Arab countries had no intention of keeping it. Over a few weeks the Arab countries and the African block rejected the deal and the UN Human Rights Council decided to head for yet another conference with a new and more radical objective. The first preparatory meeting took place a few weeks ago and a new, more aggressive agenda was decided upon, in clear conflict with the deal. EU member-countries acted like babies, protested at first but caved when the OIC and the African countries just insisted.”

What agenda did they propose?

“Apart from the usual items about Israel, the Danish Mohammed cartoons and Islamophobia. The whole agenda is clearly anti-West and anti-democracy. In the end the EU joined in spite of the fact that OIC and the African countries had broken the deal and humiliated them.”

Then the Mohammed affair and free speech is up once again?

“No, not at all. Freedom of speech is a non-issue, that’s the last thing they want. They want to talk about something else, which the preparations show clearly, because this majority decided to invite only that same UN-’Rapporteur’ who writes the annual report on religious matters and especially Islamophobia. The EU protested and claimed that in this case the ‘rapporteur’ on freedom of speech should be invited as well. But what happened? When the OIC refused to invite him, in the end the EU accepted their decision with an insignificant pirouette in order to get free speech into the equation.”

According to Anne Bayefsky and many American observers there’s a game of hypocrisy going on inside the UN, and the EU let it pass due to fear and short-sighted political interests. In private conversations with European delegates they apologize, says Bayefsky, but the EU doesn’t have the courage or the will to stand up to the OIC and the majority. But Bayefsky considers it more seriously than moral surrender:

“Apart from Israel and the USA everybody is happy. The EU is directly responsible for lending the extremists and dictatorships a nice facade and legitimacy.”

And how about tiny Denmark in all this?

“Last year Denmark aspired for membership in the UN Human Rights Council, but was rejected at the last session. Why? — well, because the OIC punished Denmark over the Mohammed cartoons.”

We haven’t heard much about that in Denmark?

“No, that kind of things isn’t flattering for Denmark and they want to keep it in the dark. But one can read it directly in the reports from the Arab delegates. On behalf of 52 states the Egyptian deputy said that their gravest concern is the consequences of 9/11 where one saw ‘a new and dangerous phenomenon, namely racist and religious hatred (…) The extremely obtrusive drawings published by a Danish newspaper offended more than a billion Muslims all over the world and threatens social harmony and peace nationally as well as internationally.’“

So, the Mohammed affair is still alive — and Denmark is still in focus?

“Yes, and the Arab countries use it in order to inflame the public and claim that a billion Muslims are being humiliated and in order to strangle Western freedom of speech. The tragedy is that the EU is hiding and lacks the moral spine to protest.”

The Danish public hears very little about those battles and defeats. Why?

“One of the reasons is that EU member countries describe the results quite differently from what really goes on. Following Durban and the ballots in the UN Human Rights Council, where the EU joined the OIC’s common declarations, they turned things upside down and pretended that a compromise was reached, which clearly wasn’t the case. In the final statement given after each ballot the EU explanation was as far from the truth as possible, because they did not want to admit their evident surrender.”

Can’t it be disclosed?

“The delegates of EU countries seem to believe that their populations and their press are too stupid or indifferent to be able to reveal it. Rather than demand ballots and vote against it, the EU consequently avoids ballots and joins the Arab countries’ consensus-statements, and this must be covered up, of course. It is done partly by silence and partly by obscuring the result in the explanatory notes followings the ballots. But everyone following the UN proceedings knows what’s going on.”

What can be done?

“I’ll tell you what: just stop funding the show! It’s USA and Europe who pay all expenses to the Durban Conference. We can protest by closing our wallets and thus quit being fooled for our own money, which means the taxpayer’s money.”

“Hardly. The hysteria is organized and it’s a battle of the fundamental values of the West; as long as Europe doesn’t understand — or refuses to understand — that battle, there’s not much one can do.”