“There is no moderate or immoderate Islam. Islam is Islam and that’s it.” 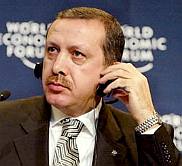 No, the Prime Minister of Turkey said it, on Turkish television.

Recep Tayyip Erdoğan is the leader of Adalet ve Kalkinma Partisi (AKP, or Justice and Development Party), and has been Prime Minister since 2003. His party is an Islamic party, but is considered “moderate” as such things go, at least by the wishful-thinking dhimmi politicians and media pundits of the West.

Apparently, however, he’s sick of the “moderate” label being bandied about. He’d like to remind everybody that, just as there is only one Allah, there is only one Islam. None of this “moderate” crap for him!
– – – – – – – – –
This story has been around for a couple of weeks, but I only just found out about it. According to MEMRI’s Turkish Media blog:

Speaking at Kanal D TV’s Arena program, PM Erdoğan commented on the term “moderate Islam”, often used in the West to describe AKP and said, ‘These descriptions are very ugly, it is offensive and an insult to our religion. There is no moderate or immoderate Islam. Islam is Islam and that’s it.”

17 thoughts on ““There Is No Moderate Islam””