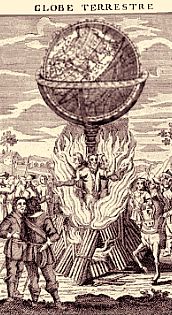 In addition to other forms of global alarmism, the Western world is on its knees, deep in a religion which has been evolving since the early 20th century, and now claims millions of adherents. In the last century, Scientism approached global proportions but it ebbed as its limits became evident. For many, a move to secular humanism followed, but it was too general to elicit the kind of ultimate concern needed to push it much past the halls of the academy. Only Marxism ever came close to the New Religion of the 20th Century. When it crashed and burned, its remaining acolytes, left with the ashes of failure, moved in to envelop and expand the New Apocalyptic Vision: Environmentalism.

Look at this definition of religion, from a website on atheism:

Religion is the set of beliefs, feelings, dogmas and practices that define the relations between human being and sacred or divinity. A given religion is defined by specific elements of a community of believers: dogmas, sacred books, rites, worship, sacrament, moral prescription, interdicts, organization. The majority of religions have developed starting from a revelation based on the exemplary history of a nation, of a prophet or a wise man who taught an ideal of life.

This notion encompasses the practices of the religion of Environmentalism quite well, as we shall see.

Paul Tillich, described our god — that which transcends us — as our “ultimate concern.” By its very nature this ultimate concern in unconditioned by anything else including, in some cases, our own individual survival. Certainly Marxism contained this ultimacy. Believers adhered to the idea that the tenets of Marxism were inevitable and would fall into place…eventually. Scientism, on the other hand, while it strove to provide all the answers, eventually failed because it could not encompass the whole of meaning. Secular humanism, focused as it was on man as the center of meaning, simply did not contain enough of the necessary elements of a religion — especially the notion of transcendence or the idea of a faith community — to qualify as a religion, per se.

But Environmentalism does indeed meet the criteria for religious belief. It possesses a fully developed “creed, cult, and code” that Belgian catechesist Christiane Brusselmans saw as the foundational system of any religion. It is these elements which must be transmitted to each new generation.

If you have young children exposed to the catechetics of the True Believers in their state schools, then you have already been given the mandatory, frowning lectures by your kindergartners for the mortal sin of throwing that brown bottle into the trash instead of carefully rinsing it, removing the label, and placing it in its proper “Brown Glass Only” receptacle before carrying it reverently to the nearest recycling center from where it will be taken and melted down to be re-used, thus saving resources and the environment. It doesn’t matter to Eviros that this is a mythical belief, not borne out by the real world.

There is a simple test for determining whether something is a resource (something valuable) or just garbage (something you want to dispose of at the lowest possible cost, including costs to the environment). If someone will pay you for the item, it’s a resource. Or, if you can use the item to make something else people want, and do it at lower price or higher quality than you could without that item, then the item is also a resource. But if you have to pay someone to take the item away, or if other things made with that item cost more or have lower quality, then the item is garbage.

Some policy analysts justify government intervention in refuse collection by invoking market-failure arguments in the collection of recyclables. Why don’t free markets for recycling work? Well, in some circumstances they do. Scrap yards, for example, recycle iron and steel. The growth segment in the U.S. steel industry is the so-called “minimill” whose raw material is recycled. Recycling markets work fine in this sector of the economy because making steel from virgin iron and coal is more expensive than making it from recycled raw materials. In other areas of the economy involving glass, paper, and plastic, for example, the discrepancy between recycled and virgin prices often does not justify the development of markets for recycling…. [S]upport for recycling is more religious than economic in nature.

If you are a true Environmentalist, then Gaia is your goddess, and all must bow before her. Gaiaism is a fundamentalist belief system; it does not allow for any deviance from its creed. Like all fundamentalist religions, rigid adherence to its principles is required and intolerance of other viewpoints is cause for angry denunciation, even physical punishment, as some Protestants against Gaia worship — e.g., many environmental scientists — have learned.

The battle lines between Environmentalists and the rest of us are clearly delineated. The Eco-Enviros are dismissively called “warmists” by skeptics outside the fold. Enviros, on the other hand, call these unbelievers and apostates “deniers” — a much better pejorative term, drawing as it does on the unspoken [Holocaust] Denial.

Much like those who are caught up in the minutiae of religious practice, the devout fundamentalist Enviro has many proscriptions, and many religious behaviors that must be adhered to if one is to be a True Believer and worshipper of Gaia. It can be a full time job.

Like all fundamentalist religions, Environmentalism is both apocalyptic and utopian: if you devoutly join in the cult and faithfully follow the credo, you will help to avoid the looming apocalypse. And in the sweet by-and-by, through meticulously cherishing poor, abused Gaia you will bring about the Final Solution to the dreaded…Global Cooling Warming.

This is a religion premised on scarcity and fear. There is simply not enough to go around for everyone. Thus if some of us have to die and others must remain unborn to achieve Gaia’s well-being, so be it. As the originator of the “Spaceship Earth” put it:

“The right to have children should be a marketable commodity, bought and traded by individuals but absolutely limited by the state.”

Next: The Religion of Gaia, Part Two

16 thoughts on “The Religion of Gaia, Part I”