Our Dutch correspondent Michiel Mans sent us the following essay about current conditions on the political scene in the Netherlands.

The Madness of King George
by Michiel Mans

The unbearable horror of being… 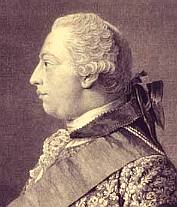 …a European. I can only speak for the Dutch, but in particular Belgium and Britain seem to be pretty unbearable as well. Let us not talk about recent Brussels events. It is too embarrassing for our Belgian friends.

If you’re Dutch, you have a socialist Minister, Ella Vogelaar, who wants the Netherlands to acquire a Judeo-Christian-Islamic tradition over time. As a Dutch person, you have an ex-Minister and runner up for PvdA (socialist) party leader who publicly stated recently “to be glad of the coming of Islam in Holland”. The same man, Jan Pronk, negotiated with the Sudanese government on behalf of the UN about Darfur. He got nowhere. The mass murder and rape continued. Pronk continues to call for dialogue with Khartoum and will continue to do so until the last black Darfurian is murdered and robbed.

If you’re Dutch, you have a spineless wimp for a prime minister who, when his lack of leadership becomes plainly visible again, embarrasses the Dutch by yelling in despair remarks about our spirit during the seventeenth century, the Dutch Golden Age. An odd remark for a leader who refuses to face or acknowledge what threatens us, something which was clear and present for our leaders during the seventeenth century when we fought until 1648 to become free of Spanish rule. Then, we mostly had leaders with guts and vision and we had princes who fought. Now we have a queen who submits on socks in a mosque, accepting the Islamic refusal to shake hands because she is a woman. Such a refusal would have meant being drawn and quartered back then. Perhaps it is somewhat rude, but it does make it clear to handshake refuseniks to either adapt to the ways of their chosen new country or move out.

If you are Dutch you have a government whose members just granted themselves a ten percent pay raise, and more is to follow. Actually, the idea was a thirty percent pay rise (30%, you read it right). Like confused Christians, which two of the three governing parties are (one very), the third in bed being the godless socialist party, they somewhat misread and reversed an old line and made it into ‘what one taketh with one hand, the other one giveth’. In our case the gift is a tax increase of one percent for all, and various steep price increases for some, like those who drive cars, smoke or enjoy a drink sometimes. Thus, just about all of us yet again, with a one percent overall tax increase on top. A cunning coincidence kept the Ministers’ salaries with the ten percent pay raise just south of the 180,000 euro limit above which certain unpleasant tax measures become applicable. How convenient.

In spite of a healthy economy and the billions extra they make on the high oil prices and the (illegal) coupling of the gas prices to it, our government needs all this extra tax cash to continue wasting it on a grand scale. For example, there are engineering white elephants such as our multi-billion euro Betuwe Line railroad which sort of ends in a ditch somewhere in nowhere in Germany. No trains in mentionable numbers run on it. Nor does the prestigious High Speed Line (HSL) to France run. Perhaps it will run from Amsterdam to Rotterdam. But then, perhaps not. It is a 6.7 billion euro failure of immense proportions. On paper it can do about 300 km/h, but it actually can’t do more than 160 km/h if it wants to be safe. That is 20 km/h faster than an ordinary train. No one is to be blamed, no one sacked, no one shamed. As ever.
– – – – – – – – –
Of course our 26,000 illegal immigrants who have just been pardoned, including known criminals, won’t come cheap as well. Neither will those who then inevitably come over in massive numbers as brides and grooms, brothers and sisters (brides and grooms are often nieces and nephews). This follow-up will not bring many university degrees or thick wads of cash either. Actually, the EU commission wants to let in another 20 million immigrants from countries like Turkey and Morocco. Great — as if we have no trouble whatsoever absorbing the ones already here! Never in the history of mankind were there populations which not only volunteered to dig their own graves, but insisted on producing and paying for the shovels as well. Amazing!

To top it all off: our government has just decided not to have a referendum about the new EU treaty, formerly known as constitution (grondwet). This was rejected by the French and the Dutch. The new treaty is in many ways even a more misty, thick, impregnable cloud of unintelligible words than the old one. The unintelligibility was intentional. But no referendum this time, the main argument being: “Trust us; it really is a good one this time.” I would trust a used car salesman with “Yes it is old and has the original engine, but it’s been completely overhauled and was formerly owned by a nurse, rarely driven and kept in a warmed garage” before any promise from a politician. In our case it is a Prime Minister who has lied and cheated before.

The madness of King George III pales into insignificance compared to the madness of our present European elite. Is there anyone, or any party anywhere, who can stop this mad competition in incompetence? Do we have someone in Holland? Maybe. Maybe the liberal Geert Wilders is such a person. His party stands at nineteen parliament seats in the polls at the moment. Nineteen out of a hundred and fifty seats. Not enough. It was nonetheless heart-warming to see and hear him repeat in our parliament his ‘barking mad’ statement. That is what he called our Minister Ella Vogelaar, mentioned at the beginning of this column.

He called her barking mad because of her Islamic cultural wishes. A horde of parliamentarians howled and were shocked. They demanded, in good Islamic fashion, ‘respect’. A very abused word in Holland. Respect is no longer something you have to earn, something you deserve after an exceptional performance or show of strength, determination or courage.

To end the madness I suggest we use the aforementioned gravediggers’ shovels to dig up King George. Even George the Third at his worst was more sensible and had more reason in him than the sane fruitcakes who govern us in large numbers at the moment.

3 thoughts on “The Madness of King George”