The month of December in the Counterjihad Calendar is represented by Spain. Spain and Portugal are the only two European countries which have endured conquest and subjugation at the hands of Arab Muslim invaders.

I’ve chosen the Cathedral in Córdoba as the iconic monument for Spain. Its official name is the Cathedral of the Assumption of the Virgin, but it is known as the Mezquita, which is Spanish for “mosque”. The Mezquita was originally built as a mosque in the 8th century after the Muslim conquest of Spain.

It’s an appropriate choice for the calendar, considering this coincidental announcement, issued today and reported by ANSAMed:

Madrid, September 28 — “Discrimination and Intolerance against Muslims” is the subject of a forum of non-governmental organisations (NGOs) organised by the Tres Culturas Foundation of Seville and the Foreign Ministry on October 8 on the occasion of the Spanish presidency of the Organisation for Economic Co-operation and Development (OECD) in 2007. Announcing the forum, sources from the foundation pointed out that he debate, which will involve major figures from the civil society in the OECD states, will be preparatory event to a conference in Cordova on October 9 and 10 with representatives of the governments of the OECD member states that will also focus on intolerance and discrimination against Muslims. The debate between the NGOs should result in a document with recommendations to be used as a starting point for the discussion on the following days.

Today’s Muslims have demanded that the Catholic Church allow the use of the Mezquita for Muslim services, citing the original function of the cathedral. However, when they do so, they are ignoring the fact that the Mezquita was built on the site of the Visigothic cathedral of St. Vincent, which had existed there prior to the Islamic conquest of the Iberian peninsula. Christian worship at that location was forcibly ended when the Arabs occupied Córdoba in 711.

The Reconquista of Spain from Arab domination began in the 9th century and continued for six hundred years, ebbing and flowing until Ferdinand and Isabella, Los Reyes Católicos, expelled the last of the Moors from Granada in 1492.

In the 13th century King Ferdinand III of Castile liberated Córdoba from the Moors, and the Mezquita became once more a place of Christian worship.

The exterior architecture of the Mezquita is relatively unprepossessing, but the internal vistas under the “poly-lobed” arches are breathtaking. To conclude the calendar, I have used an interior image, one that is quite different from the other calendar pages, and appropriate for a country that threw off the domination of Islam by force of arms.

One of my Spanish correspondents asked me to include the patron saint of Spain, Santiago Matamoros — “St. James the Moor-slayer” — in the image used for the Spanish calendar page.

According to a local tradition, the remains of St. James (Jesus’ disciple and one of the sons of Zebedee, who was slain by Herod Agrippa in Judaea in 44 A.D.) were miraculously transported to Compostela after his death. Another miracle occurred when St. James reappeared to fight the Moors with the Christian army in the battle of Clavijo in the 9th century, during the early stages of the Reconquista.

In the image below you can see Santiago Matamoros on the left, emerging from behind the pillar on his charger with his sword drawn, ready to strike once again at the Crescent and Star in the hour of Spain’s need (click for a larger image): 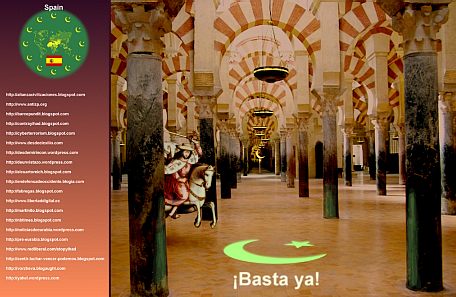 Below is a list of Spanish Counterjihad websites as shown on the calendar:

Since I was constrained to use only twelve images for this project, I had to leave out all the other countries which are currently threatened by Islam, including Portugal, Ireland, Belgium, Norway, Finland, Switzerland, Austria, Slovenia, Croatia, Serbia, Macedonia, Bulgaria, Armenia, Thailand, the Philippines, Canada, and New Zealand.

I apologize if your country was excluded; if I’m ever able to create a calendar for another year, I’ll have plenty of new monuments to choose from.

My remaining task for the 2008 calendar is to revise the page for each month to add any additional links, compile the complete calendar, and then make it available at our Café Press site.

4 thoughts on “The Counterjihad Calendar: December”