The incompetent president of the College of William and Mary has been put out to pasture. Thanks to unrelenting pressure by the angry alumni and students of the College, President Nichol’s duties will be limited to fund-raising; he is barred from any further impulsive behaviors which leave in their trail a great deal of distress and disgust in The College community. 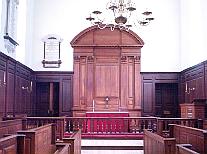 Remember the Wren Cross fiasco in November of last year? Without consulting anyone, President Nichol removed the cross which had been sitting on the chapel’s altar since the 1930’s. He had it stored in a sacristy closet because one person objected to its presence. But as the Baron said at the time:

The Wren Chapel is a Christian institution, and the College’s original charter designated an explicit association with the Church of England. The association was transferred to the Episcopal Church (then the Church of Virginia) after the Revolution, and a partnership with the local Bruton Parish Church continues to this day.

The removal of the cross is offensive in the extreme, not just to Christians, but to all alumni and friends of the College of William and Mary. It denies history, tradition, and the part of the Christian faith in the making of William and Mary and the Commonwealth of Virginia.

If you’re on vacation in Thailand and visit a wat, do you object to taking off your shoes at the door? Are you offended by the burning of candles? Do you feel excluded by all those statues of the Buddha?

When I visit a synagogue during Hanukkah, the menorah is not “unwelcoming”. It doesn’t offend me; it reassures me that I am in a Jewish house of worship, and that everything there is as it should be.

And after this arbitrary high-handedness, he tried to tough it out, but neither the students nor the alumni would let it alone. There were indignant editorials, a blog was created to garner signatures for a petition to have the cross returned to its place, and alumni wrote angry letters to the College and to the Commonwealth’s General Assembly — the latter funds President Nichol’s salary and okayed his contract, which runs till 2008.

So after much shuffling and speechifying, Nichol was forced to return the Cross to a rightful place in the Wren, though this time around he managed to limit access by making it necessary for students to specifically request that the Cross be placed on the altar for private devotions. Just another bureaucratic hoop to jump through.

And, of course, the whole episode gave the MSM lots of opportunities to slant the story their way. Two months after Nichol’s very original and uncollegial sin — i.e., jumping in with both feet without bothering to check out his decision with anyone — The Washington Post headline was spinning it this way:

A much more accurate headline would have been “School’s President Creates a Mess All by Himself.” But they don’t do reality much at the Post.

So after this protracted brouhaha, the pressure of the students and alumni got the Wren Cross back on the altar, at least by request. And they lived happily ever after with this “compromise”, right?
– – – – – – – – –
Sorry, but we’re dealing with academia here. The level of integrity in the ivory tower is about the same as it is in the hallowed halls of Capitol Hill. In the same kind of stealthy way that Congress repeatedly tries to get some kind of amnesty bill shoved down our throats, the College has once more unilaterally — and stealthily — changed the rules. According to the independent student newspaper, The Virginia Informer, here’s the new drill:

The Wren cross is no longer available for private student devotion in an apparent policy change that was not discussed or authorized by the Committee which crafted the decision returning the cross to the Chapel.

Professor Alan Meese, the Ball professor of law at the Marshall-Wythe School of Law and co-chair of the Committee on Religion at a Public University confirmed that the committee’s recommendation was limited to the permanent return of the cross in a display case and the provision allowing the sacristy to “house sacred objects of any religious tradition for use in worship and devotion by members of the College community.”

Prior to Mr. Nichol’s unilateral decision to remove the cross from the Wren Chapel, the previous policy which governed its display allowed students who wished to use the chapel for private prayer the option of placing the cross on the altar.

A March 6, 2007 press release authored by the President and the Board of Visitors accepting the limited recommendation of the committee apparently replaced the previous policy with a new one precluding the placement of the cross on the altar for unscheduled private prayer. “The cross will still be available, of course, for use on the altar during appropriate religious services….Under this policy, the Wren Chapel will continue to play its unique historic and affirming role in the life of the College: a place of worship for our students and a site for our most solemn occasions.”

In other words, if we keep it hidden long enough, these idiots will forget the Millington Cross ever existed. Down the leftist memory hole it goes, along with all the other politically inconvenient pieces of history we refuse to consider.

To confirm this line of thinking, you have only to look at the College’s decision to use student activity fees to sponsor a Sex Worker’s Art Show. Of course, the feckless Nichol was right on target:

President Gene Nichol issued a statement saying: “I don’t like this kind of show and I don’t like having it here … But it’s not the practice and province of universities to censor or cancel performances because they are controversial.”

How’s that for double think? On one hand he can closet the Cross to avoid offending sensibilities (one person complained) and on the other, he can permit prostitutes to come on campus and deliver their message of whoring as “art” because of some addled notion that to restrict this tawdry bilge is censorship. In the p.c. world of academia, if it’s about sex, it’s freedom. If it’s about religion, it’s embarrassingly wrong. Religion is for those who can’t think for themselves, while random sexual congress serves to liberate students from out-moded neurotic crutches like faith.

Our culture has become so degraded it looks like a Fellini film — especially if you wander on to campus grounds. Given his deranged moral reasoning so far, I wouldn’t be surprised to see President Nichol strolling around his new pasture with his underwear perched on his head. It would make as much sense as anything else he’s done in his tenure.

At least they’ve fenced him in so he can’t run roughshod over the College’s traditions anymore. Virginians will tolerate quite a bit, but don’t fool with the Commonwealth’s history. Too bad no one told Nichol that before he went galloping into Williamsburg. Had he read up ahead of time on Virginia folkways, maybe he could have avoided the experience of having thirty-six members of the state assembly voting to strip him of his salary.

Personally, I think they’re right to do so: the money wasted on Nichols would be better spent on needy sex workers.

4 thoughts on “The College Puts President Nichol Out to Pasture”