How’s this for a news story?

Muslim imams in Belgium have protested against a TV ad depicting Mohammed as a pot-bellied hippy picking up half-naked women in a nightclub.

The advertisement is being aired on the country’s main TV channel to promote youth channel Plug TV.

The Muslim Council says this sort of portrayal of Mohammed is disrespectful to believers and that it is wrong to use him for advertising.

“Wot th’—?!” you exclaim. “How could this be? Belgium is totally dhimmified; there’s no way this could have gotten past the PC-Multicultural Censorship Brigade!”

Well, it didn’t really, of course. But I’m not making it up entirely; I just did a little search-and-replace within the text of a BBC story that a reader sent to us. The victim of this particular piece of infidel blasphemy was actually Jesus Christ.

The Beeb didn’t include a photo of the Jesus hippie in its story. Fortunately, however, Steen always has photos of everything, and he hasn’t let us down. In the interest of journalistic fairness, and to entice you into the rest of the story, here’s Christ the Belgian Hippie: 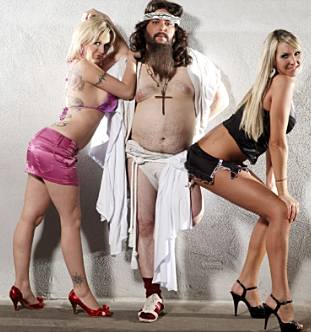 And now for the BBC story:

Catholic bishops in Belgium have protested against a TV ad depicting Jesus as a pot-bellied hippy picking up half-naked women in a nightclub.

The advertisement is being aired on the country’s main TV channel to promote youth channel Plug TV.

The Catholic Church says this sort of portrayal of Jesus is disrespectful to believers and that it is wrong to use him for advertising.

However, Plug TV denies that the advertisement is blasphemous.

The ad shows a long-haired hippy Jesus grooving along as he tries to get into a nightclub and is refused entry by the bouncers.

Jesus makes the sign of the cross and sweeps aside the bouncers, shrinking them so they are left in his wake as dwarves.

The Jesus character then disappears into a huge limousine with the women but his attention is distracted by an advertisement for Plug TV before he is recalled by God who is standing on a cloud, wearing a T shirt with “Number one dad” written on it.

The God figure tells Jesus off for wanting to watch Plug TV as well as everything else — saying “you still want more”.

The Catholic Church has expressed its disapproval to the TV channel — saying advertising is not the same as journalism and should not share the same concerns about freedom of expression.

The Church believes this advertisement “crosses the limits of respectability”.

Plug TV however argues it is not blasphemous but contains a message about a “laid-back Jesus addressing youth”.

If you are anxious to see more photos of this piece of haute couture, go visit Plug TV’s website.

I notice that the Catholic Church in Belgium agrees with the imams on one thing: the power of the state should be used to suppress blasphemous speech, because freedom of speech does not extend to blasphemy. Nice going, bishops!

This should make everybody redouble their efforts to spread the Motoons and the Modoggies far and wide, because the media are not going to do to ol’ Mo what they did to Jesus.

And, as a Christian, I’m offended.

So… you’ll have to excuse me for the rest of the evening. I’ve got a Belgian flag and my Zippo, and it’s time for me to join the mob and go burn a few embassies.

7 thoughts on “Christ in the Ruins”