Al Qaeda in Iraq is claiming the formation of a new fighting group: “Al-Khansa Suicide Bomber Brigade.” This stalwart band of warriors will consist of women only.

“Verily a group of faithful women, consisting of mothers, wives and daughters of martyrs who were members of the Islamic State of Iraq, have formed the suicide bomber brigade al-Khansa…”

Al-Khansa was a seventh century poet – a woman named Tumadir bint Amru al-Harith bint al-Sharid- who converted to Islam in Mohammed’s early days. Her sons died in holy wars and she wrote paeans to their glorious deaths. 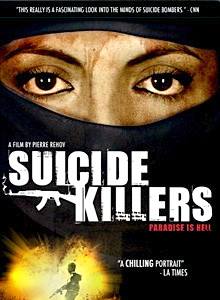 These suicide bomber brigades are an outgrowth of the women’s auxiliary of Al Qaeda, dating back at least to 2004, though the announcement of the formation in Iraq seems to be new. Women suicide bombers in Chechnya’s “Black Widows” (in 2002) and the female self-destructors in Palestine (since the 1970’s) seem to have set the standard for this perversion. Often the women drawn to the suicide missions have already been marginalized by their clan or tribe for one reason or another.

Al Qaeda in Iraq’s atrocities among the Sunnis in Baghdad have caused a great deal of blowback among the families there. Since the leaders of AQI are drawn from outside the country, the decisions about whom to attack and when have not always served their interest. US troops are not the only ones making cultural mis-steps in Iraq.

From the Small Wars Journal, this small excerpt from a long analysis worth reading in its entirety:

More than 85% of Iraqis claim some form of tribal affiliation; tribal identity is a parallel, informal but powerful sphere of influence in the community. Iraqi tribal leaders represent a competing power center, and the tribes themselves are a parallel hierarchy that overlaps with formal government structures and political allegiances. Most Iraqis wear their tribal selves beside other strands of identity (religious, ethnic, regional, socio-economic) that interact in complex ways, rendering meaningless the facile division into Sunni, Shi’a and Kurdish groups that distant observers sometimes perceive. The reality of Iraqi national character is much more complex than that…

… and tribal identity plays an extremely important part in it, even for urbanized Iraqis. Thus the tribal revolt is not some remote riot on a reservation: it’s a major social movement that could significantly influence most Iraqis where they live.

for years the tribes treated the terrorists as “useful idiots”, while AQI in turn exploited them for cover and support. One person told me that AQI’s pitch to the tribes was “we are Sunni, you are Sunni. The Americans and Iranians are helping the Shi’a – let’s fight them together”. But this alliance of convenience and mutual exploitation broke down when AQI began to apply the standard AQ method of cementing alliances through marriage. In Iraqi tribal society, custom (aadat) is at least as important as religion (deen) and its dictates, often pre-Islamic in origin, frequently differ from those of Islam. Indeed, as one tribal Iraqi put it to me, “if you ask a Shammari what religion he is, he will say ‘I am a Shammari’ “ – the Shammari being a confederation which, like many Iraqi tribes, has both Sunni and Shi’a branches.

Islam, of course, is a key identity marker when dealing with non-Muslim outsiders, but when all involved are Muslim, kinship trumps religion. And in fact, most tribal Iraqis I have spoken with consider AQ’s brand of “Islam” utterly foreign to their traditional and syncretic version of the faith. One key difference is marriage custom, the tribes only giving their women within the tribe or (on rare occasions to cement a bond or resolve a grievance, as part of a process known as sulha) to other tribes or clans in their confederation (qabila). Marrying women to strangers, let alone foreigners, is just not done. AQ, with their hyper-reductionist version of “Islam” stripped of cultural content, discounted the tribes’ view as ignorant, stupid and sinful.

This led to violence, as these things do: AQI killed a sheikh over his refusal to give daughters of his tribe to them in marriage, which created a revenge obligation (tha’r) on his people, who attacked AQI. The terrorists retaliated with immense brutality, killing the children of a prominent sheikh in a particularly gruesome manner, witnesses told us. This was the last straw, they said, and the tribes rose up. Neighboring clans joined the fight, which escalated as AQI (who had generally worn out their welcome through high-handedness) tried to crush the revolt through more atrocities. Soon the uprising took off, spreading along kinship lines through Anbar and into neighboring provinces.

Other tribesmen told me women weren’t the only issue. The tribes run smuggling, import/export and construction businesses which AQI shut down, took over, or disrupted through violent disturbances that were “bad for business”. Another factor was the belief, widespread among the tribes (and with at least some basis in fact) that AQI has links to, and has received funding and support from, Iran. In their view, women were simply the spark – AQI already “had it coming”. (Out in the wild western desert, things often tend to play out like The Sopranos… except that AQI changed the rules of the game by adding roadside bombs, beheadings, murder of children and death by torture. Eventually, enough was enough for the locals.)

Several major tribes are now “up” against AQ, across all of Anbar, Diyala, Salah-ad-din, parts of Babil and Baghdad (both city and province). Some in Anbar and Diyala have formed “Salvation Councils”… In other provinces things tend to be quite informal, based on local elders. In Anbar the movement has acquired the name “the awakening”.

Obviously, if AQI manages to recruit female suicide bombers from among Sunni women, their chances of creating murder and mayhem improve. Men tend to pay attention to the actions of other males as potential aggressors, so women can serve usefully — they are as invisible as IEDs. However, the fact that AQI is reduced to advertising for recruits probably speaks to the deterioration of their operation.

There are many roads to possible success for Coalition troops and for the Iraqis themselves. The arrogance of AQI may be a catalyst in the coming together of troops and tribes.

This may prove to be a most interesting Ramadan. If the women are out in force, AQI is succeeding. If they are staying home, then we can deduce a failure of calculation in the enemy’s equation.