The month of May in the Counterjihad Calendar is represented by Sweden.

Of all the countries in Europe, Sweden may be the most severely in crisis. With its public discourse smothered by PC Multiculturalism, a national preference for non-confrontational consensus, and the generous state subsidies that it offers to Third-World immigrants, Sweden is already far down the path to Islamization.

I have chosen the Stadshus, Stockholm’s City Hall, as Sweden’s representational monument for the calendar. Stockholm is not as severely afflicted with immigration problems as is, for example, Malmö, but the Stadshus is probably the iconic landmark that will most resonate with the average Swede (click for a larger image): 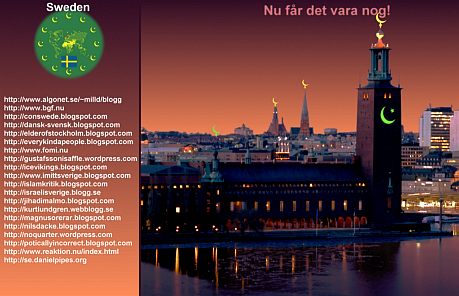 With the help of several Scandinavian email contacts, I have compiled the following list of Swedish Counterjihad websites:

For each country involved, I invite readers to post suggested Counterjihad links in the comments, or send them via email. I particularly need links for Britain, the Netherlands, Spain, Greece, and Italy.

The goal is to have the finished 2008 Counterjihad Calendar available at our Café Press site sometime in September.

Next up on the calendar is Italy, for the month of June.

6 thoughts on “The Counterjihad Calendar: May”