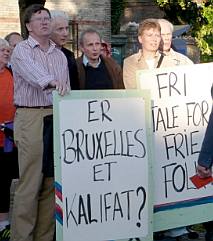 I reported on Friday that SIAD (Stop Islamiseringen af Danmark) organized a demonstration on behalf of SIOE in front of the Belgian embassy in Copenhagen, to protest the denial of a permit for the 9-11 SIOE demonstration in Belgium.

I’ve just learned from SIAD’s blog that the autonomer paid a little visit to the demonstrators right after the end of the event. For readers who are not familiar with Denmark’s autonomer, here’s a summary about them from one of my earlier posts: 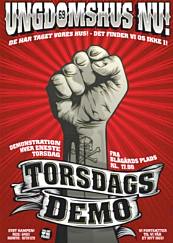 “Autonomer” is the Danish term for a hodge-podge of anarchists, Trotskyites, radical Greens and all the other players we see in the anti-war and anti-globalist demonstrations that erupt periodically across the Western world. Here in the USA it would be International ANSWER filling the same role.

They are called autonomer because they reckon themselves to be autonomous, i.e. not part of the patriarchal capitalist warmongering fascistic country they happen to be living in. They are the true independent free-thinking progressive idealists of our time…

And how do these youths support themselves? Why, they are recipients of government welfare benefits, of course!

On the SIAD blog, Anders Gravers reports an attack on the demonstrators just after the end of last Friday’s protest:
– – – – – – – – –

After the manifestation, 7 of the participants carrying the signs went back to their cars.

Suddenly there were 15-17 autonomous [i.e., the autonomer] on bikes coming our way and they started to throw filled bottles after our group.

One bottle hit on the ground only one meter from a woman from the demonstration. It landed with such a power that it would have killed her if she was hit in the head.

Five of our group succeeded to scare the attackers away with the use of the signs as shields.

It’s shocking to realise that these autonomous are prepared to kill in order to stop democratic-minded people’s right to manifest.

This phenomenon is often seen in history.

It’s called fascist methods in order to stop utterances that do not harmonise with the fascist way of thinking.

And at the same time we have to remember that they act in harmony with [Mayor of Brussels] Freddy Thielemans’ words!

Denmark’s autonomer are a local subset — a franchise, if you will — of the pan-European “Antifascist Action” movement. One might call these people “Anarchists Without Borders”, since they make it a point to travel anywhere and everywhere to oppose racism, homophobia, Islamophobia, capitalism, globalization, etc., etc.

Because Denmark, unlike many other European countries, still has a functioning democracy with a collective sense of self-worth, the autonomer are contained by the police and the citizenry and do not amount to much. In places like Belgium and the Netherlands, however, the anarchists are crypto-brownshirts, functioning as PC enforcement squads with the tacit support of the Socialist establishment.

According to my contacts in the Low Countries, the anarchists in Belgium mean business, and can count on being given a free hand when acting against “racists” and “fascists”. Whenever conservative anti-immigration groups demonstrate, the anarchists arrive in force, and come prepared with weapons and body armor.

If you’re planning on being in Brussels to observe a moment of silence on September 11th, you might want to wear a bicycle helmet, just in case.

11 thoughts on “The Autonomer Make an Appearance”