Fjordman, in his post on Thursday, said this about Sweden’s Muslim immigrants and the Social Democrats:

In 2006, the Muslim Association of Sweden demanded in a letter, signed by its leader Mahmoud Aldebe, separate family laws regulating marriage and divorce, public schools with imams teaching homogeneous classes of Muslims children their religion and the language of their original homeland, and a “mosque in every municipality to be built through interest-free loans made available by the local municipalities.” This to demonstrate “Islam’s right to exist in Sweden” and to “heighten the status of and respect towards Muslims.” The demands were rejected by the Social Democrats then, but it now appears as if they have recognized that they need to cooperate with the fast-growing Muslim community if they want to regain power, so we shouldn’t be surprised to see calls for the use of sharia law in family matters by an otherwise officially feminist party.

As an illustration of Fjordman’s words, a Swedish reader sent along this photo from sossefritt.se: 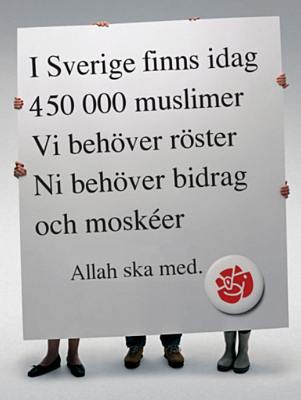 In Sweden today there are 450,000 Muslims. We need votes; you need allowances and mosques.

Allah must come along.

The last line is a wordplay on the motto of the Social Democrats: alla ska med, “all must come along.”
– – – – – – – – –
The original image at sossefrit.se listed the number of Muslims as 150,000. Our Swedish reader insists that the lower figure is out of date, and that 450,000 is a reasonable estimate.

He asked me to use my photoshopping skills to change the number, and I have gladly complied.