UPDATE: At the end of this post I wondered aloud how the Dubliners might yell “the crazy Danes are coming!” A kind reader from Eire sent the following answer:

Meanwhile, Yorkshireminer mentions in the comments that genetic research in Iceland shows that their ancestry (and I’m parphrasing here) is mostly Viking men and Irish women. So now we know why Iceland has been rated the happiest country.

It’s certainly couldn’t be for the climate. 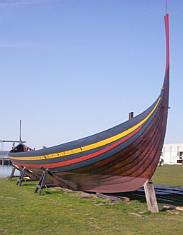 Dublin is the destination for the replicated Viking ship that set sail yesterday from Denmark.

Since Dublin was founded by the Vikings in the ninth century, it is fitting that they come back in style:

A legendary Viking warship has been reconstructed and has set off to retrace the ancient voyage to the Irish capital Dublin, originally a Viking settlement.

Vikings once struck fear into the hearts of coastal communities across northern Europe, and now a group of Norse seamen are once again sailing straight for Dublin, Ireland. But this time the voyage is not about rape and pillage, but about scientific discovery.

It was Dublin’s harbor they liked – the “black pool” – according to my mother (a native). And Irish colleens, no doubt – there are many blonds and redheads in Ireland to attest to their Viking ancestry. It may account for the Jackeens’ fondness for beer, too.

So right now they’re somewhere at sea (with a GPS cheater):

…The 65-person crew will only be able to use oars and sail power to make the 1,000 nautical mile journey to Ireland. The voyage is an attempt to better understand Viking ship building and travel.

The ship is a replica of the Havhingsten fra Glendalough (Sea Stallion of Glendalough), the largest Viking warship ever made. It was built in Ireland in 1042 and sank 30 years later in Roskilde harbour, south of the Danish capital Copenhagen…

The present-day Nordic adventurers are a volunteer crew of sailing enthusiasts and history buffs. The hardy seafarers are facing a tough seven-week voyage that will take them across the North Sea and around the northern tip of Scotland. They will be braving the elements on the open deck, with little shelter, and each with only about a square meter of space.

Living as I do in an area quite fond of historic re-enactments, particularly of the Civil War variety, I can understand the desire to do this. Personally, I’d rather stand on the shore and wish them bon voyage myself. A square meter of living space requires the inner space of a very large mind. Back in the ninth century there was rape and pillage to look forward to, but these guys are just in it for the “adventure” – or so we’re told.

Dublin women had best be on guard: crazy Danes are coming.

I wonder how you say that in Gaelic?

7 thoughts on “The Vikings Are Coming!”