Metroblogging Islamabad is covering the situation at the Red Mosque, live.

If you’ve been vaguely wondering “what is the Red Mosque, and why should I care?” here is the place to go for background. 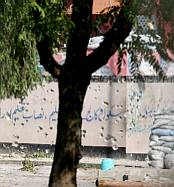 An American Ex-pat in South East Asia has some explanations and predictions about the very short future of Musharraf after the smoke has cleared:

The Lal Masjid (Red Mosque) is one of the oldest mosques in Islamabad. Its name comes from the color of the paint used on its exterior walls. Since 9/11 the mosque in Pakistan’s capital has became a fortress for firebrand clerics and their pupils, the burqa-clad young women among them being more prominent than young men, not only because of their robes and the long bamboo sticks in their hands but also because of their training for combat and their desire for jihad.

Despite the leadership of the Lal Masjid having a vehement disdain for modernization, The tech-savvy cleric Maulana Abdul-Rashid Ghazi and his brother soon set up a website (now offline) and eagerly grasped the techniques of mass communication and public relations frequently giving interviews to the local and foreign media with aplomb and relentlessly denouncing Musharraf’s regime with impunity.

As their influence grew, Pakistan’s opposition party members from the MMA seeking some sort of religious legitimization and the sympathizers from within Musharraf’s own core-constituency and government seeking atonement for their sins would begin to wait in line outside the cleric’s offices to pay homage.

In Islamic usage, civil society and the congregation of the faithful are conterminous, and within a short period of time the mosque leadership would initiate an anti-vice campaign.

Despite the local and foreign media reports on their vigilantism, the reality is that many of the residents of Islamabad saw them as a positive factor, an Islamic Guardian Angels if you will, determined to “rid the streets of crime and vice, make citizen’s arrests and offer “education programs” to businesses and individuals” …

In turn, the madrassahs would begin to fill up and Pervez Musharraf would stand by impotently as 14 new anti-western, pro-Taliban madrassahs opened in the capital of Islamabad (more than any other administration) and whose membership would swell to over 16,000 students, doubling in the last year alone.

Finally the [UK] Times online has some analysis and predictions of its own:

With his back to the wall politically, General Musharraf has only two alternatives: the imposition of martial law or a deal with the political establishment that would inevitably curb his powers.

He is now negotiating in secret for a return to Pakistan of Benazir Bhutto, the exiled former Prime Minister, against whom all corruption charges would be dropped. Analysts suggest that if she becomes Prime Minister again, she will quickly move to limit the near-dictatorial powers enjoyed by the President.

NOTE: Ex-Pat’s mention of the MMA should strike fear into the heart of anyone who has hope for the eventual demise of the Taliban in Pakistan. This can only make their regressive, fundamentalist influence grow, and the plight of women become even more precarious.

One thought on “The Red Mosque: Questions, Answers and Predictions”