Below is a new essay from Phanarath, our frequent Danish commenter, translator, and contributor.

The Non-Intelligent Response
Or, the Salvation of the West
by Phanarath

The West has become a very civilized place.

We have become used to dealing with people of reason and good morals. So even when we have enemies we tend to look for something good in them, something they would like to happen, something that would make it worth their while to make peace with us. We think that a reasonable deal can usually make things better for everyone involved.

And this is because we are clever and civilized. We don’t run around attacking people for no other reason than that they are unknown to us. We try to talk to them, thinking that a common understanding will benefit all parties. However, we didn’t arrive at this way of doing things in a peaceful manner. We had to fight many wars and share many stories with our former enemies before these ideas dawned open us. 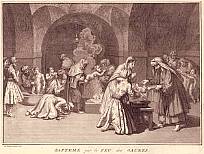 Now all that is behind us, and we are civilized. We are a peaceful and happy people. People who get unhappy can go to a doctor and get it fixed. We are the last people, as Friedrich Nietzsche predicted in Also Sprach Zarathustra (1885), those who blink with their eyes and claim to have invented happiness.

However, we seem to fall somewhat short when dealing with Muslims. It seems that all the resources and the justifications tend to fall their way.

But when empires were still around there was another way of dealing with things. From the Romans to the Nazis (in eastern Europe and Russia) it was the custom to execute a number of civilians whenever a soldier was killed by what might be a fraction of the local population. The British empire had the same way of dealing with such things. If a British soldier was killed ten or a hundred would be swinging on the gallows indiscriminately the next day.

Today we know that this kind of punishment is immoral and unjust. But back then people counted on it. And it became the natural order of things. So when the Romans, the Brits, or the Nazis killed off a village, people would tend to blame those that had made them angry.

I would love to be a “good” person. But at the same time I have come to understand that morals are no good if they don’t do any good.

When we try to respond intelligently to the threats the Western world is faced with today, we ignore the fact that we are dealing with barbarians. Any of the old empires would have done a lot better then us. The danger we face is Muslims, and they are not as civilized as we would like them to be. They have no self-interest that we can try to understand, not as a group anyway.

The intelligent response will not work. It will only be exploited.
– – – – – – – – – –
The US is sometimes accused of being imperial, and so is the rest of the West for that matter. But look at what the Headquarters United States Marine Corps has to say about the purpose of the US Marines (pdf format):

Today’s Marines operate within a continuum of force where conflict may change from low intensity to high intensity over a matter of hours. Marines are also engaged in many military operations other than war, such as peacekeeping missions or noncombatant evacuation operations, where deadly force may not be authorized. During noncombative engagements, Marines must determine if a situation warrants applying deadly force. Sometimes Marines must decide in a matter of seconds because their lives or the lives of others depend on their actions. To make the right decision, Marines must understand both the lethal and nonlethal close combat techniques needed to handle the situation responsibly without escalating the violence unnecessarily.

It sounds very reasonable. But does it sound like the soldiers of an empire? No way, not by a long shot.

Soldiers of an empire would be expected to kill any commoner who looked at them in a wrong way. They would only be held responsible if they happened to kill someone “important”. The USA is not behaving anywhere near the way an empire would. So basically the US especially, and the West in general, is getting all the blame for being an empire without getting any of the benefits, and it is not working very well for us.

What will work is a predictable response to any Muslim offense, and the response must be repeated every time the offense happens. And I suppose that the time for killing innocent people is past.

But there are other ways. Imagine if European countries started to expel ten Muslims every time Muslims raped or killed a European. Just ten random Muslims sent to the Middle East. After a while even Muslim communities might start to speak out against killing and raping infidels. And even if this isn’t possible, we could subtract ten Muslims from the people allowed to enter the country — the important thing would be that the rapist or the killer knows now that ten of his brothers can’t get in because of what he did. And everyone knows that this is an automatic response.

Imagine that Israel, every time there was an attack by Palestinians, simply went in to the Palestinian areas and pushed people out of a piece of land, put up fences and incorporated the territory into Israel, naming it after the dead Israeli. Everyone would whine for a while, but after this has been done a few times, people will start to see it as the natural order of things. And Palestinians would start blaming the terrorist for the loss of land.

If a rocket is fired from a school area, and the school is important for the local community, the Israelis can say that they are very sorry to take it over, and that they know how important it is to people and that they wish there were another way around this, but the rules are the rules, so we are really sorry and we hope you can get by. The important thing is to do exactly the same every time no matter what. Always the same response.

So, in summary, I think that a non-intelligent or automatic response is what can save us.

I understand, of course, that this is very far from what is possible at the moment politically. But things may change faster then we would like.

17 thoughts on “The Non-Intelligent Response”