Our Swedish correspondent Carpenter offers a recent compilation of the egregious and institutionalized anti-Semitism to be found in Sweden’s sole news agency, Tidningarnas Telegrambyrå.

We owe him a big vote of thanks for going through all the material and translating it for us.

The Demonization of Israel in the Swedish Press
by Carpenter 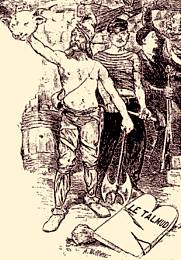 One can come to the conclusion that a similar majority today still do.

What is the cause?

It seems to me that Sweden’s Tidningarnas Telegrambyrå (The Newspapers’ Telegram Agency) has a share of the responsibility for this. It is Sweden’s one and only news agency.

Let us first take a look at their Middle East-correspondent, whose name is Stefan Hjertén.

In an Expressen article from January 13 in 2006, signed by Peter Löfgren, the author tells us about an interview in Ordfront (a Swedish socialist magazine) he participated in. According to him, one of the questions asked was: “How do you consider your role as Middle East-correspondent? TT’s correspondent [Hjertén] considers himself to be a Palestinian activist, do you?” [emphasis added].

And consider a statement by Hjertén, made December 13 in 2005 in SVT’s Godmorgon Sverige, on the murder of Christian Lebanese MP Gebran Tueni:

There was a rule, that Christians should have appointed a president of Lebanon… That must be changed slowly. This seems to occur through crisis, through political murders, through other awful things. But somehow it’s a better Lebanon, where people decide for themselves, that paves a way through this. Now, Lebanon is actually a smaller dock area for Syria. It was madness when France decided to separate Lebanon from Syria. Beirut is a Syria’s seaport; Lebanon and Syria are entirely bound to each other, so they have to agree. [emphasis added]

Here he justified the murder and denied Lebanon’s right to national sovereignty.

Is he capable of making a distinction between his role as an anti-Israeli advocate and a news reporter? Indeed not.

Despite years of emotional overstepping and disinformation by TT, none of the Scandinavian friends of Gates of Vienna has informed Baron and Dymphna about their propagandist character. I’m surprised that Fjordman hasn’t even mentioned TT in any of his essays published on the blog (correct me if I’m wrong).

Via the blog TT-kritik (TT-criticism) one can find hundreds of examples of TT’s propaganda (in Swedish, though). Let me give you some examples:

On 19th of May in 2004, TT in a dispatch regarding a proposal on a new UN-resolution (I’ve tried in vain to find an Internet version of the article; the papers probably have deleted it due to its propagandist image):

The formulation is entirely in Israel’s taste since it condemns ‘terrorism’ — a codeword for Palestinian resistance. [emphasis added]

– – – – – – – – – –
In “Recommendations from the Media Language Group”, published on TT’s web page, it is recommended to refer to Israel’s security barrier/fence/wall on The West Bank as a “barrier”. Yet, TT has called it a “wall” several times. For instance, in a dispatch from the 17th of July in 2006:

Palestinians are being barred by the wall [headline]

Each day, Israel’s digging machines are chewing in a bit closer to Muhsen al-Natsheh’s house.

Cackling hens peck around in a pool of dirty water from the sewer pipes the excavators have smashed to pieces. A red marking on a rock shows how the wall is to be extended, barely a meter from al-Natsheh’s house

Consider this piece from 26th of October, 2005, on one of Ahmadinejad’s annihilate-Israel statements:

Ahmadinejad called for a Palestinian entity, resistance, and annihilation of the Zionist regime

It was “the world oppressor” (the term for USA) that established the Zionist regime, said the president [Ahmadinejad].

Notice how TT “forgot” to add quotation marks to the Zionist regime. In that way, TT agreed with Ahmadinejad calling it so.

Compare that to the first translated dispatch in this post: terrorism is provided with quotation marks.

Israeli minister of defense Shaul Mofaz said that no efforts on the ground against the Gaza territory or the West Bank have been decided. His motivation was that Palestinian president Mahmoud Abbas is going to be given a new chance to intervene with ‘the terrorist groups’ [emphasis added]

On 23rd of July, 2005, two Palestinian terrorists killed a Jewish couple in the Gaza strip. During the same day, they were tracked and killed by Israeli soldiers.

However, when TT reported about the events, they provided a dispatch with the headline “Two Palestinians killed”. TT-kritik wrote:

In order to understand how sick this is; imagine that the incidents on 9/11-’01 got the headline ‘20 Arabs killed’.

He has a point there.

On the 29th of Mars, 2005, TT received criticism from the DN editor Peter Wolodarski, due to TT’s dispatch on the chess player Bobby Fischer, notorious for his anti-Semitism and America-hatred [I couldn’t find an internet version]:

TT usually publishes edited dispatches from the international news agencies. There is nothing wrong with that.

But on the other day, TT released a re-writing of an AFP dispatch on the former chess master Bobby Fischer, which is so remarkable that it requires an explanation.

Fischer is notorious for his hatred towards America and his anti-Semitism. For instance, on September 11th, 2001, he said on a Philippine radio station that the attack on the US was ‘fantastic news’ and that he hoped for ‘the military to take over the country, which should have closed every synagogue and arrest every Jew.

Fischer also has said that the US is controlled by ‘filthy, crook-nosed, circumcised Jewish swine’.

Entirely correctly, AFP states that Fischer has slandered his old fans with his militant anti-Americanism and anti-Semitism.

But when TT is translates the dispatch into Swedish, the former chess master suddenly is not questioned for his Jew-hatred. No, Swedish readers instead get to learn that ‘Fischer, himself a Jew on the mother’s side, has been noted for his critical position towards Israel’. What does TT mean?

Although Hamas is labeled as a terrorist organization by the EU as well the US, TT only brought to attention the fact that Hamas is considered as such by the US. They sent a dispatch on the 21st of February this year, regarding Oxfam’s criticism of the boycott:

The quartet introduced the boycott [of Hamas] a year ago when Hamas, labeled as terrorist organization by Washington, won the democratic elections that gave the organization government control.

The examples above are only some of TT’s oversteps. There are many more of them! I’m only giving you a sample.

(We all know about the Zionists’ tentacles in the press, right?)

6 thoughts on “The Demonization of Israel in the Swedish Press”