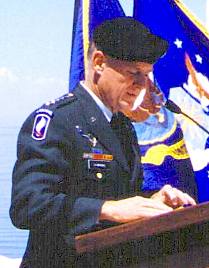 Michael Yon has a memorial tribute to the late General Wayne Downing. One of The most admired of our senior officer corps, General Downing served after his retirement as a military expert for the media. Mr. Yon describes his pleasure and awe on meeting Downing in this capacity in Iraq:

During the evening, as I walked back to my tent, there was a crew of fourteen from NBC. Sound people, cameramen, a big satellite dish, the works. Three producers. It was all there—the face of the “evil” Mainstream Media in the personages of Brian Williams and Richard Engle. And standing in the dark with them as military analyst for NBC was retired 4-Star General Wayne Downing, a legend in special operations. (Think Delta Force and all the rest of the gang.) Wayne Downing graduated West Point in 1962. Served in Vietnam and everywhere else under the sun. He might have killed more terrorists directly and indirectly than any man on the planet.

I had to rub my eyes. Was that General Downing?

He took the opportunity to meet the general and are thus began a conversation that was to last until the General’s death.

The family is requesting donations be sent to these groups:

Both sites allow for credit card donations – I checked. You can go here or here to give.

Mr. Yon’s full tribute to this man he greatly admired can be found on his site.

The milblogs are weighing in, giving their full measure of the man. He was proof of the fact that the military in this country attracts some of the best people we have. Despite the militant anti-war groups in this country, we will always have our General Downings: great men and great leaders who other men are willing to follow into battle.

In his last email to Mr. Yon, General Downing said he thought that eventually it would be up to the Iraqis to sort things out; he thought that a civil war could be part of the equation. Such an expectation for a repressed people is realistic. Soviet Russia kept the lid on sectarian strife until, finally, there was no more Soviet Russia. Now that there is no more mini-me Saddam Hussein (remember that his hero was Stalin), Iraqis have many scores to settle…and miles to go before they sleep.

Day is done,
gone the sun,
From the hills,
from the lake,
From the skies.
All is well,
safely rest,
God is nigh.

Go to sleep,
peaceful sleep,
May the soldier
or sailor,
God keep.
On the land
or the deep,
Safe in sleep.