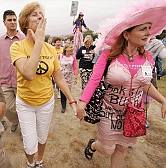 Below is a forwarded email we received about the events planned for tomorrow, Monday morning, July 23rd.

(That’s when Cindy Sheehan marches on Washington as a part of her on-going labor against the war in Iraq. If you look at some of the online information, though, Miss Cindy is just the appetizer to the major disruption planned by ANSWER for September 15th, when General Petraeus is due to report to Congress on the state of Iraq)

The A.N.S.W.E.R. Coalition is supporting an important anti-war event on Monday, July 23 led by Cindy Sheehan to demand the impeachment of President George W. Bush and Vice President Dick Cheney. Please see below for details. We hope you can join this event.

This Monday, July 23, Cindy Sheehan will be leading a march from Arlington National Cemetery to the Capitol Hill Office of Congressman John Conyers to demand that he begin impeachment proceedings against President George W. Bush and Vice President Dick Cheney.

These actions are a part of the Journey for Humanity initiated by Cindy Sheehan and the Camp Casey Peace Institute on July 10. Beginning in Crawford, Texas, Cindy and many others have been traveling all around the country to demand the end to the war on Iraq and the impeachment of the Bush administration. She has been submitting regular reports from the road on ImpeachBush.org.

The details for the July 23 Washington DC event are as follows:

John Conyers, a quisling of the first order, has been rehearsing Bush’s impeachment for several years now. Since he is dependent on the Muslim voters in his district for re-election, his diatribes are often anti-Semitic:

John Conyers, son of a leftist Detroit union activist, represents the largest Arab population in the country. His district includes Dearborn, Mich., nicknamed “Dearbornistan” by locals fed up with cultural encroachment and terror fears from a steady influx of Mideast immigrants.

Conyers, who runs an Arabic version of his official Web site, does the bidding of these new constituents and the militant Islamist activists who feed off them. They want to kill the Patriot Act and prevent the FBI from profiling Muslim suspects in terror investigations. They also want to end the use of undisclosed evidence against suspected Arab terrorists in deportation proceedings.

Recall that John Conyers held a mock impeachment hearing regarding the Iraq War which devolved into an anti—Semitic hate fest. He featured known anti—Semitic “witnesses” and “experts” that blamed American Jews and Israel for the war in Iraq. Simultaneously, anti—Semitic “literature” was being distributed at Democratic National Committee headquarters…

So Mrs. Sheehan and Rep. Conyers are not strange bedfellows at all. They both paint over the truth with a broad “blame-America-blame-Bush” airbrush.

No doubt the usual pink ladies and fellow-travelers from ANSWER and La Raza will be along for the ride.

These people represent so few of us and yet delude themselves that their very small slice of the long tail is the whole political animal in this country.

11 thoughts on “On the Road Again”