The founding of Israel in 1948 is considered by the Arab world to be the greatest tragedy since the Crusades, and maybe even since the days of the Prophet. That’s why they have a special word for the event: the naqbah, or nakba, meaning “tragedy” or “catastrophe”.

Nothing else quite matches the nakba within the Palestinian territories for sheer emotive impact. In the Palestinian mind, the sorrow and rage engendered by the event justifies any activity — lying, stealing, destruction of property, kidnapping, suicide bombing, the murder of innocent people, the indiscriminate slaughter of women and children — anything.

Above all, the fury over the nakba requires the destruction of the state of Israel, and the extermination of the Jews.

Given all that, the only explanation I can put forward for the following story is — like so many actions taken in the West of late — mass insanity. Israel has decided to teach the nakba in its official school curriculum:

Arab schoolchildren in Israel will be taught next year that the founding of the State of Israel was a tragedy (Nakba in Arabic) in accordance with a widespread Arab view of the event.

The Education Ministry, headed by Prof. Yuli Tamir (Labor), has approved adding the Arab version to the curriculum in response to calls by Arab nationalists who requested the “Nakba“ version be taught in their schools. 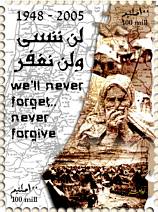 The new directive approves a Grade 3 textbook “Living Together in Israel,” which was written by Arabs who left their homes during the 1948 War of Independence and claim that Israel took their land. The textbook evenhandedly points out that the Arab nations refused to accept the United Nations partition plan creating the Jewish State and a new Trans-Jordan country.

MK Zevulun Orlev (NRP), a former Director-General of the Education Ministry, called upon Prime Minister Olmert to fire Tamir for making an “anti-Zionist decision that erases Jewish history and denies the State of Israel as a Jewish state. The Education Minister gives Arabs the legitimacy not to recognize Israel as the State of the Jewish people. This decision marks the “Nakba“ of Israel’s education network.”

Strategic Affairs Minister Avigdor Lieberman slammed Tamir as “expressing not only post-Zionism but also political masochism… The Israel left always complicates itself trying to justify the other side without understanding that there is nothing to justify.”

Moshe Feiglin, running for Likud Party Chairman on behalf of the party’s Manhigut Yehudit (Jewish Leadership) faction, said, “If it is OK to teach Israeli[-Arab] schoolchildren that the Jewish victory in the War for Independence and the establishment of the Jewish State are actually a catastrophe, this means that the State of Israel is an illegitimate and temporary body… Yuli Tamir hereby reveals that she does not identify with the Jewish claim over the Land more than with the Arab claim. If we do not hurry and give Israel a leadership that truly believes in the justness of our existence, Israel will be erased from the map.”

It’s evident that there are some anti-Zionist Jews in Israel who look forward to the end of the state of Israel. Presumably they think that the utopian bi-national Palestinian entity will be such an enlightened and peaceful place that they will not be in danger of violence at the hands of the new Arab majority.

There are many people in the West these days who seem bent on collective suicide. But in the United States or Europe, it’s possible to imagine that the deadly results of suicidal government policies can be postponed for a generation or two.

But not in Israel. The mass insanity in evidence there will have a direct and immediate impact on the current generation. “Palestine” will not wait a moment before driving the Jews into the sea.

So maybe it’s time for the Jews in Israel, like those in Europe, to pack their bags and move… where?

Where can they go?

9 thoughts on “Israel Embraces the Nakba”