Apparently the Finns are not satisfied with the amount of ethnic unrest they already have; the government wants to import some more.

KGS of Tundra Tabloids brought this article to my attention: 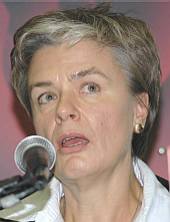 The government is worried about a labour shortage — and Finland’s first Migration Minister wants quick legislative changes to make the country more welcoming to foreigners. She says that the Aliens’ Act will be updated in bits and pieces, as a complete overhaul would take too long.

Finland badly needs more workers like Yusuf Kart, a Kurdish immigrant who runs a restaurant at Helsinki’s Caisa international cultural centre. He has lived in Finland for 10 years, but says he still does not really feel at home. Kart applied for Finnish citizenship two years ago, but has not gotten any response from the authorities.

“You don’t feel welcome, that’s the problem. And why not? I’m working, I have my business here and my family here,” he says.

Notice the emphasis on “not feeling welcome”. If an immigrant feels unwelcome, it trumps anything else. Being an asset to the host society, assimilation to the host culture, not being a radical Muslim — none of these matter if the immigrant doesn’t feel welcome.

The government now plans to revise many parts of the Aliens’ Act in an effort to make Finland more attractive to immigrants and simplify bureaucracy.

Translation: We will bring them in by the boatload with virtually no background checks.

Minister of Migration Astrid Thors says parts of the law must be changed to speed up immigration. However it will be done piecemeal, as a rewrite of the whole act would take years — time that Finland simply cannot afford to waste.

First of all, immigration-related issues are now being centralised under one new ministry, to be led by Thors.

The interesting thing is that Ms. Thors is a member of Finland’s ethnic Swedish minority. The Swedish Finns are not discriminated against — on the contrary, they feel very “welcome”. According to my Finnish sources, they are over-represented in government, the academy, and the financial institutions.

Kart is too busy to spend much time thinking about administrative overhauls. He just wants to be treated equally by the authorities.

“If they treat me differently than you, it gives me a bad feeling, as if I’m a second-class or third-class citizen. It doesn’t feel nice,” he says.

OK, That’s it! It doesn’t feel nice, so we will dismantle our society and hand over the keys to the culture to the newcomers. Maybe they will feel better then.

The only explanation I can come up with for all of this is mass insanity.

It’s not like the Finns don’t have many instructive examples of where the proposed new policies will lead them. They only have to look at Britain, or France, or the Netherlands, or their next-door neighbor Sweden, to get an idea of what’s in store for them.

KGS has this to say on the topic:

If the prospective immigrant doesn’t hail from a traditional democratic pluralistic society (this obviously does not automatically exclude the candidate), the host state has the right to question whether the immigrant fully understands what a liberal democracy is, how it functions etc., and his/her responsibilities as an individual within the host society. Does the immigrant understand human/civil rights and respect the pluralism that the host society affords? Does the state intend to demand a mandatory civics course for all potential candidates that are being evaluated?

…I have repeated this time and again, that the Finnish Tartars (Sufi branch of Islam) have proven that moderate Islam can indeed become a functional, practical ingredient in a modern day pluralistic democracy. Not unlike the Jews who immigrated to Finland around the same time in the late 1800’s — when Finland was an autonomous Russian Duchovy — the Tartars consider themselves to be Finns first and Muslims second, and became fully integrated citizens while keeping their customs and traditions. We should expect no less from future immigrants.

Well, we should. But don’t hold your breath.