President Bush has been seduced by the dark side of the Force.

That’s the only explanation I can think of. 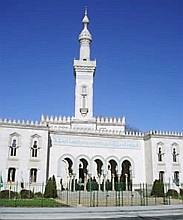 He will speak tomorrow at the Washington Islamic Center, the most prominent Saudi-funded mosque in Washington DC. Not to mince words, it’s a Wahhabist mosque.

Dymphna posted on this topic earlier this afternoon, in an open letter to the President.

Bloggers: we need to blog on this, and have our readers light up the phones at the White House tonight and tomorrow.

The Administration claims to want to shut down terrorist groups. The groups represented at the President’s speech include CAIR, MPAC, ISNA, etc., which are known cover groups and fronts for the architects and funding sources of the Muslim Brotherhood and related Islamic terror groups. The President must state his firm commitment to shutting down these terror groups.

The President must make the point that Islam as it is practiced by many of these groups is not a religion, but a political ideology which seeks to dominate the rest of us by force.

The groups invited to and/or sponsoring this event must disavow Hamas, Hizbullah, etc. specifically and by name and not just utter generalized mealy-mouthed condemnations of “all kinds of terrorism”. Those who will not join in such a denunciation are de facto apologists and supporters of the jihad groups.

The leaders of these groups have not addressed the criminal and immoral attacks on civilians by Islamic suicide bombers and terrorists. This must change. They must publicly and clearly denounce these attacks as unacceptable and un-Islamic.

Any effort to implement the above changes is routinely denounced as “racism” and “Islamophobia”. The President must make clear that opposing political Islam is not any of these things; it is an honorable, patriotic, and morally justified enterprise in defense of human liberty.
– – – – – – – – – –
These groups must be compelled to acknowledge that extremist and violent Islam is a real, widespread, and serious problem, and not just a figment of the “infidel” imagination. They must be seen publicly to join in the movement to denounce and resist it.

The Islamic groups which encourage their followers not to cooperate with the police, the FBI, and other law-enforcement agencies are not just being unhelpful, they are breaking the law.

The groups involved in this event have routinely denounced the “Zionist lobby”. It should be stated explicitly that this is an unacceptable attack on the pluralism of American society.

The focus on Israel as the putative cause of all Islamic violence must stop.

We call on President Bush to state publicly and forcefully that the Muslim Brotherhood, which is behind many of these “charities” and lobbying groups, is a dangerous, violent, and subversive entity which threatens the security of the United States and the entire Western world. It must be delegitimized and put beyond the pale of acceptable social action.