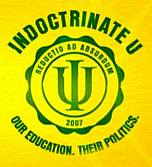 Here’s a must-see along with a must-do:

The must-see is this trailer for a documentary about the killing of free speech on American campuses. It is every bit as malign as you thought, maybe even worse, depending on your recent exposure to “higher” education. As a parent, I’m still in recovery myself.

The must-do is a simple sign-up to advocate for having the documentary shown in your area. If you live in East Podunk, sign the zip code for the nearest town with a theatre. The website will send you a confirmation email in return. When you click the acknowledgement, that verifies your email address as valid and they can use it to approach local theatres.

Indoctrinate U is one of the most important documentaries of the year. But it might also be the most important documentary you aren’t able to see this year. We know there is a vast audience for this film. But commercial distributors — the executives who decide what films go into theaters — don’t. So unless we can prove to them that this audience exists — that you want to see it, Indoctrinate U might not come to a theater near you. All you have to do is sign up to see the film if it comes to your area.

Once enough people make this pledge, we will have a mandate that commercial distributors can’t ignore. In the meantime, we’ll arrange for local screenings every time 500 people sign up in a particular area.

At colleges and universities across the nation, from Berkeley and Stanford to Yale and Bucknell, the charismatic filmmaker uncovers academics who use classrooms as political soapboxes, students who must parrot their professors’ politics to get good grades, and administrators who censor diversity of thought and opinion. With flair and wit, Maloney poses tough questions to America’s academics and university administrators — who often call campus security rather than give him straight answers. ..

But Indoctrinate U can tell only representative stories from some campuses. Every day, at colleges and universities across the nation, professors and university administrators continue to scorn their students’ academic freedom and belittle the once-lofty goals of “liberal education.” This page will complement the film by presenting more stories of the American university’s unconscionable abuse of the public’s faith and of its educational mandate. Please check back soon for updates.

I think this could become an important platform for the horror stories of students, professors and parents who are intimidated and silenced, often with the help of law enforcement.

So look out, Michael Moore. You have spawned some unintended results with your fakeumentaries. The truth is gonna rise and whack your disheveled backside.

And none too soon, fella.