The death of a 12-year-old Egyptian girl at the hands of a doctor performing female circumcision in the country’s south has sparked a public outcry and prompted health and religious authorities this week to ban the practice.

The girl, Badour Shaker, died earlier in June while being circumcised in an illegal clinic in the southern town of Maghagh. Her mother, Zeniab Abdel Ghani, told the Al-Masry Al-Youm newspaper that she had paid $9 dollars to a female physician to perform the procedure.

On Thursday, the Egyptian Health Ministry issued a decree on female circumcision, stating that it is “prohibited for any doctors, nurses, or any other person to carry out any cut of, flattening or modification of any natural part of the female reproductive system, either in government hospitals, non government or any other places.”

It warned that violators of the ban would be punished, but did not specify the penalty. The ban is not as enforceable as a law, which requires passage in the national legislature.

In other words, a “decree” without teeth.

The Norwegian media and politicians are firming up in the battle against their immigrants’ barbaric custom of genital mutilation of little girls. And it sounds like the crackdown is serious: 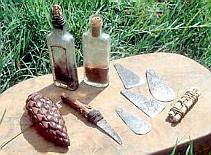 Norway’s center-left government unveiled a list of 14 emergency measures they’re putting into place immediately, in an effort to keep girls from being sent out of the country for the procedure many describe as barbaric.

The measures come after state television channel NRK broadcast a shocking report last weekend that nearly 200 girls living in Norway have been sent by their own families to Somalia in recent years, to undergo female circumcision.

The practice is illegal in Norway and the country has had a law for years preventing it. Prosecution has been minimal, however, with only a handful of cases brought to court.

Now officials are trying to crack down and enforce the law. That can include preventing girls at risk from leaving the country, if their families are suspected of sending them abroad to be circumcised.

That’s quite a concession in a country that bends over backwards to protect immigrants’ “rights.” Of course, there are the usual warnings from the nay-sayers:

“Skin color and travel destinations won’t be enough,” Justice Minister Knut Storberget of the Labour Party was quick to point out. “The authorities must have concrete suspicions that circumcision is planned, in order for the family to be denied passports.”

So what would entail “concrete suspicions”? Would it be enough that the family is Somalian, going back home for a little vacation trip and have a five year old girl in tow? Since that is the ruse most often employed, how do officials know their “suspicions” are correct? Since everything will be denied at the family and tribal level, what is a poor leftist country to do? Simply continue cleaning up the horrid aftermaths of such procedures?

Afttenposten reports on the medical help given these girls after the fact:

Sarah Kahsay, a midwife at Ullevål University Hospital in Oslo, told newspaper Aftenposten that she and her colleagues have tried to help around 260 girls and women during the past three years.

One must question how high the percentage is of mutilated girls who seek medical help. If 260 girls were treated, how many more never showed up for treatment and are forced to endure their pain and “healing” at home?

Obviously, the hospitals get the severely botched cases. Parental concern can indeed overcome tribal laws and it would be hard for a family to watch a child die in pain when competent medical help is available. To that extent, immigration to a Western nation is making inroads in Somalian practices, even if it is only after the fact.

Ninety percent of the girls and women who suffer this practice are ethnic Somalians. Female genital mutilation also occurs among girls from Eritrea, Ethiopia, Sudan, Gambia and Senegal. Even Kurdish girls from Northern Iraq are starting to show up, though the report notes that these children are older — about eleven or twelve. Somalian children undergo this horror at a much younger age, as Ayan Hirsi Ali has attested personally.

Why the big crackdown? Public awareness is why:

The agonized screams of one young girl being forcibly held down while her genitals were being cut shook Norwegian viewers and has led to a political outcry on the issue. There have been calls for increased enforcement of the law prohibiting female circumciscion, a fatwa against the practice, and regular medical checks of young girls believed to be at risk.

Some steps being taken by the government in reaction to the public demands are:

This last step must await approval by Parliament, which is currently on summer recess. Perhaps by the time they meet again, the furor will die down. However, visual images make a deep impact, and the Norwegian people may not give up easily.
– – – – – – – – – –

Wherever there are Somalians, though, this practice continues. If more MSM outlets in other places where Somalians settle are willing to do the public a service by grapically exposing this inhumane and cruel treatment of little girls, the custom may be eradicated. I hope Hirsi Ali will use her position in the US to make a stand against what she had to endure. We have Somalis here, too, and you can bet their little girls are enduring this brutal “custom,” if not here, then on “vacations” at home in the old country.

Let’s see what the Minnesota MSM are willing to do for these little girls. Let’s see if Hillary talks about “the children” in her numerous trips through areas which contain large minorities who practice this barbarity. This is one custom that can’t be protected by the ethnographers who insist we leave indigenous people to follow their own customs. Once they elect to immigrate, they are no longer indigenes, they are immigrants who have to make their way in a new culture.

In this instance, it is definitely a case of “faster, please.”

2 thoughts on “Norway Cracks Down on Female Genital Mutilation”