Today is Muslims of America Day in the MSM.

CP is reporting three separate instances of MOA sightings in the major news media. The first was a feature video on the Fox News main webpage. The second was an article about Islamberg in the New York Post. The third was another Fox News story, this one on John Gibson’s TV program. 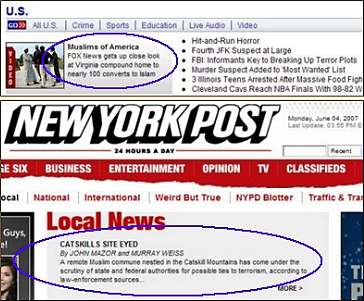 The media focus is on Jamaat ul-Fuqra at last. No more scurrying around behind the baseboards and hiding under the refrigerator — the bright light is on!

Hat tip for the New York Post story: Fausta. Thanks to CP for the screen caps.