The Manhattan Institute has a website worth visiting. Coming across it is timely, considering all the emails a faithful reader has been forwarding on to us about the peccadilloes of our favorite school, the College of William and Mary.

His latest email was a copy of a Wall Street Journal editorial from today’s paper. Called “A College Education”, the editors take notice of a rising wind demanding change in the university marketplace:

The merits of these disputes seem less important than the fact that there is now earnest and public discussion about the performance of college administrators, who, like career government bureaucrats, are usually adept at avoiding accountability.

This trend is highlighted by what the WSJ dubs “the William and Mary electorate.”

Any number of colleges and universities seem to be having PR travails these days, but this may be a case where the turmoil is healthy. The school year that is now ending has turned out to be something of a banner year for academic reform.

Consider the recent unrest at the College of William and Mary in Williamsburg, Virginia. When the school’s tour guides were informed in an email last winter that a century-old cross was to be expelled from the school’s chapel, alumni and students mounted a “Save the Wren Cross” campaign. Press releases, a Web site, and a petition that collected 18,000 signatures led to a restoration.

Nothing gets an administrator’s attention like the empty sound of thousands of alumni wallets snapping shut. Not to mention the ongoing erosion of publicity that renders a college risible in the eyes of the public. Who wants to send their child to a Saturday Night Live joke, full of po-mo capers involving the arbitrary closeting of the Wren Cross or a weekend devoted to the vocation of “sex workers”?

It seems that those who ought to stay in the closet are out, and vice versa. As it is now, William and Mary has stood tradition on its head and behaved obscenely in front of it.

The College is not the only institution of higher learning that is feeling the heat. Powerline has covered the situation at Dartmouth, but today the WSJ mentions it as well:

That’s certainly true at Dartmouth College, in New Hampshire, where alumni have used a petition process for the board of trustees to elect four independent candidates in recent years. These “petition candidates” have run against disciplinary procedures that lack due process rights, speech codes, and an increased budget emphasis on administrative bureaucracy at the expense of academics.

The Dartmouth administration responded last fall by proposing a new set of trustee election rules that would have made these outsider candidacies more difficult. The measure needed support from two-thirds of voting alumni to pass but failed to get even a majority. The year ended with the election of a fourth reformist, University of Virginia law professor Stephen Smith.

Even more encouraging is the actual shutdown of one of the most politically correct colleges we’ve ever had to endure:

[M]arket forces [have] prevailed. Antioch College in Ohio — which became famous for sundry curious radicalisms like requiring verbal consent before two students may kiss — was designed to accommodate 2,700 students, but will soon close its doors indefinitely. Its enrollment, now around 300, is no longer sustainable.

Now we have the new website called Minding the Campus sponsored by the Manhattan Institute. According to its mission statement,

Minding the Campus is dedicated to the revival of intellectual pluralism and the best traditions of liberal education at America’s universities. Look here for the most current thoughts and opinions on American academic reform.

Meanwhile, if you (as does the Baron) love to be filled with loathing, here are some more links sent by our reader regarding William and Mary’s rotund President Nichol:

This one airs the concerns of two members of the Philosophy Department regarding their Esteemed Leader’s hubris: 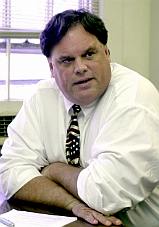 The destructive effects of ineffectual college boards was national news this past year. Gene Nichol, president of the College of William and Mary, without consulting the college’s board, removed a cross from public display in the Wren Chapel. Why did he do that? Because the board does not hold him to account. Because they follow instead of lead, just as [Ross Mugler, a board member at Old Dominion University] says.

Does anyone really believe that Nichol would have removed the cross had he felt the watchful eyes of a conscientious board upon him? The president feels beholden to no one within the structure of the college — his behavior makes that plain. So, yes, taxpayers of the commonwealth should be alarmed.

The Wren cross, however, was small potatoes. The destruction wrought by unchecked power runs far deeper. The most significant casualty has been academic standards. The provost (the highest academic officer at the college) and the dean of Arts and Sciences appear to march in step with Nichol’s drum, having taken calculated steps to make academic standards subservient to an ideology of sensitivity.

Echoing Nichol’s excuse for having removed the Wren cross, the administration now ranks academic excellence beneath the president’s hospitality norm. Students and faculty must feel, above all else, welcomed. And, as the administration recently informed us, that means that students and faculty must not feel certain sorts of anxiety. They must be protected from the threat of genuine standards, the fear of knowing that they might fail.

That is why the administration, just before the summer break when oversight is at an annual minimum, informed the philosophy department at William and Mary that it is being placed in receivership. The current chair of the department (who publicly refused to support Nichol’s decision concerning the Wren cross) is being removed. A faculty member from the English department, who is a vocal exponent of the current administration is being installed as chair for the next two years.

The justification for all this? The hospitality norm. Here are the dean’s exact words: “Excessive concern about standards, combined with a lack of mentoring or encouragement, has created an inhospitable and unsupportive climate for junior faculty.” The opposition between standards and hospitality could hardly be more explicit. Nor could the dean’s preference for diminishing standards.

The destructive effects of unchecked power extend still further, to civil liberties. The administration, in the absence of oversight, has applied its hospitality norm only when it suits. Those who are weak or those who claim to be victims are granted asylum. Everyone else, especially those who shoulder the responsibility of applying standards, are hardly made to feel welcome. Instead the administration has deliberately smeared the reputation of senior faculty in philosophy.

Charges of misconduct, leveled against a “bloc” of senior members, were publicly distributed by the administration. There was no attempt to verify the charges and no opportunity to respond to the charges prior to them becoming public. With enough insularity, due process goes out the window.

Most recently the administration has said that even talking about standards is evidence of an inhospitable climate. So now, in the name of making some (but not others) feel welcome, our speech is being censored. This is what happens when careerist administrators are granted unchecked power. This is why news that nearly half the members of college boards in this country are ill-prepared to do their job is indeed alarming. [Emphasis added]

President Nichol has an interesting, if checkered past. Can anyone tell me how people of this caliber are appointed to such powerful positions? Do they have a proven track record of raising money and squelching protest, or is this a paradigmatic representation of the Old Boy Network in action?

On August 4, 1996, Katie Kerwin, a political writer for the Rocky Mountain News provided a trail of bread crumbs which would lead from Tim Sullivan — at that time the president of the College of William and Mary — through the University of Colorado, to Gene Nichol and his present position as Tim Sullivan’s heir.

Back then, Sullivan was effusive in his praise of Nichol’s abilities:

“Nic is pretty much the person you see. He doesn’t hide his character behind masks. He’s very straightforward and has a wonderful sense of humor. He’s unpretentious and very, very smart,” said Tim Sullivan, president of the College of William & Mary in Virginia and former dean of the William & Mary law school where Nichol once taught.

Nichol is a politician of the most mendacious stripe. Look at his shenanigans when he was head of the Law School at the University of Colorado… you remember CU and Ward Churchill, surely? This is one case of similar fleas hopping about on the same dog:

Nichol was dean of the CU law school and had been a finalist for the president’s job. [Judith] Albino got it, and Nichol pledged to work with her. But when she lost the confidence of the faculty and deans, he signed a petition to oust her.

“I was trying to do what was in the best interests of the university,” Nichol said. “I wasn’t a ringleader or an instigator.”

On that January day, he stood up on behalf of the faculty and read a litany of complaints against Albino.

One of the regents, a Democrat who supported Albino, angrily asked Nichol about his own record.

Why had he renounced his membership in the Democratic Party and become an unaffiliated voter?

“I’m a practical man,” Nichol answered with a smile.

At last, Albino felt she had proof of the real Gene Nichol.

“Gene Nichol has shown me more than once that he is capable of doing whatever is necessary to promote Gene Nichol,” said Albino.

“I went from liking him very much to not trusting him at all,” said former CU regent Norwood Robb. “I believe he’s Machiavellian.”

For a philosopher, Nichol obviously didn’t spend a whole lot of time studying ethics; either that, or he studied them in order to understand which precepts he could safely flout:

“I’m a practical man,” Nichol answered with a smile.