UPDATE: YouTube has removed the Mohammed-burning video, but it has now been posted at Google Video. The embed below now references the new location; let’s hope it works. 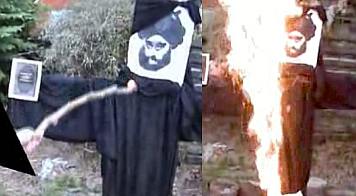 I mentioned on Saturday that a group in Denmark was planning to burn an effigy of Mohammed (instead of a witch) at the traditional midsummer festival.

Since then the group that burned the Prophet has contacted SIAD, who kindly uploaded the video for us.

The intro is in Danish, and it goes by too fast for me to translate easily. Maybe some of our Danish readers can give us the gist of it.

But the last thing you see before the action rolls is this:

Hold on to your helmets, Vikings. You’re in for a wild ride…

Update: CVF operative flyboy has translated the Danish text for us:

Saint Hans’ Eve has always celebrated the tradition of burning away the evil, in earlier times symbolized by the witch, who was supposedly directly connected to Satan. And if the witch was not burned then the harvest could not be safely brought into the house.

Now a new evil has arrived in Europe, an evil that lies and kills in the name of their so-called God. An evil that springs from the so-called Prophet Mohammed. Therefore, in our time, it is he who symbolizes evil and it is not just one harvest that will disappear, but all of Western Europe’s future that will vanish if this evil is not dispatched to Hekkenfeldt [i.e. Hell, literally the Hekla volcano in Iceland — BB].

Therefore will we burn the so-called Prophet Mohammed, on June 23, 2007, in three nameless places.

We burned Mohammed in three different places across the country. We now release the video from the first burning. The next videos will be released on July 23 and August 23.

87 thoughts on ““For a Mohammedan-Free Denmark””