We got an email this morning from Fausta, with this appeal:

The Princeton Public Library is holding a “Human Rights Film Festival” from May 11th through the 13th. It includes two Castro propaganda films, The Power of Community: How Cuba Survived Peak Oil, and Salud! What puts Cuba on the map in the quest for global health… but the roster is pretty awful.

Those of you out of state might want to call Leslie Burger, head of the PPL, also head of the American Library Association — the number for the library is 609-924-9529.

I welcome all suggestions.

You can see Fausta’s post on the topic here. I don’t need to remind readers that all phone calls to the Princeton Public Library should be polite, calm, reasonable, and courteous.

I went over to the Human Rights Film Festival and had a look around. Yes, the Fidelistas are there, just as described by Fausta. But if you scroll through the list you’ll find a motley crew of other artists, performers, activists, and enlightened beings of different kinds, all celebrating diversity and seeking peace and justice. But don’t look for any conservatives in the mix — the Festival is not that diverse. The political positions represented there range from the denim-and-granola tree-hugging Save the Earth types through pinkos of various stripes and statures all the way to the hardcore Reds and Anarchists of the far Left.

If you decide to attend the Festival, you can watch “Cartoons for Peace and Justice”.

Or you can sit down and enjoy “The Dog Who Was a Cat Inside”:

The dog and the cat who is inside of him have to learn to live together peacefully, even though they want very different things.

But keep scrolling and you’ll run into this young woman: 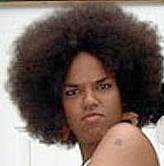 Walidah Imarisha helped to found and served as the first editor of the political hip hop publication AWOL Magazine. She was one of the editors of the 911 anthology Another World is Possible. The bad half of the poetry duo Good Sista/Bad Sista, She has been featured on PBS, VH1 and has performed with people as diverse as writer John Irving to Chuck D.

Her post-Katrina documentary Finding Common Ground in New Orleans, has screened at the Museum of Modern Art as well as numerous film festivals around the world. She does anti prison organizing with the Human Rights Coalition, a group of prisoners’ families and former prisoners and is on the board of the Central Committee for Conscientious Objectors, which does anti militarism organizing work.

I was intrigued by Ms. Imarisha, and went on a little internet snipe hunt to see what else I could find out about her.

Her bio at Live Poets says this about her:

Described as “a homegirl with a hand grenade”, Walidah uses her words to spark crowds. A historian at heart, reporter by day she stays true to the cause by “slapping ya ass silly with knowledge.”

And this is how she describes herself in her Live Journal profile:

i’m the bad sista to the good sista, both of us two sides of the same coin. the good sista will negotiate, commiserate and empathize, but if that don’t work, ima come in to intimidate, instigate and pulvarize. it’s all up to you… in another life i was a journalist, and i’m trying to get back into that. i am an organizer, a rabble rouser, a sometimes grump, and i aspire to be a revolutionary.

But she also turns out to be a fan of the Free Mumia movement, and works tirelessly to get the notorious cop-killer Mumia Abu-Jamal, a.k.a. Wesley Cook, released from death row.
– – – – – – – – – –
Ms. Imarisha provided the text for a MOVE photo-essay hosted by San Diego Indymedia. That’s right: MOVE, the hardcore anarchist revolutionary commune that got into that little contretemps with the Philadelphia authorities back in 1985.

Another World is Possible is an anthology of post-9/11 thought marketed by Global Exchange. I’ll let the site blurb describe the book:

Another World is Possible begins with personal stories from September 11th. It follows with: Why did this happen? Analysis of US foreign policy in the Middle East, and the backlash against Arab-Americans and freedoms at home. And: Where do we go from here personally? Spiritually? In foreign policy? As a society?

Much has been said about the necessity of stopping Al-Qaeda, the Taliban, and the Anthrax senders little about the role of the US military in training and funding these monsters, nor the likelihood that Bush’s cowboy-style reaction will leave Americans even more vulnerable to future attacks.

Contributors Tell Stories that have gone underreported in the media: The families of dead and displaced undocumented workers who were denied relief; the thousand plus detained and unexplained people; the profoundly unpatriotic ‘Patriot Act’; Bush’s insane energy policy; the ill-conceived sanctions on Iraq; the diversion of relief funds to corporate bailouts; and systematic silencing of those questioning the Washington war consensus.

Well maybe nothing. Or hardly anything. But there is this, from a charming event back in 2003:

Through new legislation and Executive orders, the Bush Administration has radically altered our constitutional rights. Under the auspices of investigating “terrorism,” the government may now infringe upon your legal rights without probable cause. Join other concerned citizens at Philadelphia’s largest mosque to promote education for action in defense of civil liberties.

Look at that list of supporters — a veritable alphabet soup of the usual suspects among the Muslim-American “charity” organizations, along with their lefty fellow-travelers.

But the Shalom Center! Don’t they know any better?

Walidah Imarisha, as a citizen of this great country, has a right to air her views, and I’ll be among the first to step forward and support her privilege under the First Amendment — provided, of course, that her words don’t extend as far as incitement to violence or conspiring to overthrow the United States government.

My objection, however, is the usual one: Why do my taxes have to pay for all this flumdiddle?

Strictly speaking, for this particular event, it’s probably more Fausta’s taxes than mine, since she actually lives in the state of New Jersey.

But how much do you want to bet that some of those federal arts grant dollars have trickled their way down to help support Walidah Imarisha’s zeal for Peace ’n’ Justice?

I’m a broken record, folks. From PBS to the NEA to Homeland Security to federal crop subsidies — you might as well just pile your tax dollars into a wheelbarrow and dump them into the trashburner rather than send them to Uncle Sam.

2 thoughts on “Your Tax Dollars for Peace ’n’ Justice”