A new church is being built in one of the rough neighborhoods of the French city of Sartrouville. But the bells in its tower will never call the faithful to prayer — in fact, its tower won’t have any bells.

That’s because the church authorities and the parish priest have decided to be sensitive about their Muslim neighbors. There’s no indication that the Muslims have made any particular demands for the silencing of bells, but the church is doing it anyway.

The parish is in one of the Zones Urbaines Sensibles (“Sensitive Urban Zones”, or ZUS). These are largely immigrant districts that have so deteriorated that they have been bureaucratically designated as troubled — and in many cases lawless — areas where special administrative procedures are in place.

The official website of the new church has an architect’s drawing of the future church, and it looks like any other modern site — but no bell. It’s a little surprising that they allow it to display a cross.

I don’t know what to make of this peculiar example of French dhimmitude. The whole thing is occurring in a low-key voluntary manner, and no one is making any great fuss about it. Still…

The upside is that the new building is needed because of an increase in the number of worshippers, especially young people. So there’s hope yet.

Below is my translation of an article from today’s Le Figaro about the new church. I have translated cité as “city” or “housing project”, depending on the context. This may not be the right idiom; I welcome correction from our Francophone readers. When part of a place name, I have left it untranslated — I believe that these are the names of specific housing projects.

In Sartrouville, the church in the projects will have no bells

In order not to “provoke” the population of the surrounding neighborhoods with a Muslim majority, the new building will be illuminated but… mute.

The building should be completed by the end of the year. For the moment, at the junction of l’avenue Georges-Clemenceau and la rue Saint-Exupéry, it is just a building site surrounded by high scaffolding, like hundreds of others in Sartrouville (Yvelines). A varied and indifferent crowd of pedestrians strolls along the street, unconcerned about the structure, which is already thirty feet high, and the pennants hung here and there calling for them to make their donations.

Because this building site is unusual. Located on the plateau of the second-largest city in the department, in the very heart of the “sensitive areas”, it is a church in the process of rising from the ground, as attested by the square bell-tower, already completed and decorated with the cross. An event in itself in a district classified as “sensitive urban zone”. And — all the more notable as a construction — in order not to “provoke” the population of the district, which has a Muslim majority, the building will not have a bell. In place of a great bell, the stained glass will be lit by a projector, making the building an illuminated edifice, but… mute. 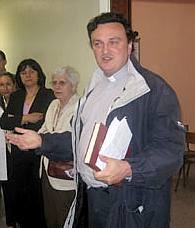 It’s an intentional choice. “The Christians are not the only inhabitants of the district,” explains Fr. Alexandre de Bucy, the priest of Saint-Vincent-de-Paul parish which covers the northern part of Sartrouville. “Many do not share our faith, even if they respect us. Out of regard for the neighbors who did not have a bell close by up until now, we did not want to put one up.” The faithful do not seem to be disturbed by the prospect. “A church without a bell, it is not very normal, but it’s OK, it doesn’t shock me,” says 16 year-old Alvin off-handedly.

With eyes of a deep blue, wearing a traditional clerical collar on a gray shirt, Fr. de Bucy has a charmed air. The young 36 year-old priest looks at the plans for his building site with great anticipation. L’église Jean-XXIII, which rises before his eyes, is being built on the site of an old Catholic place of worship which has become too small to hold the multitude of new participants, in particular the young people. It must be said that the practice of religion has the wind at its back in these districts.

Islam, Judaism, Protestantism, and Catholicism are experiencing a revival amid the towers and barriers of the difficult housing projects. Within a few hundred yards of the building site, behind the Léo-Lagrange park, the Muslims have opened a prayer room, while on other side the Salafists have invested in the cellars of la cité des Indes. These places of worship are also silent.

Among these and the others, coexistence proceeds without clashes, even if incidents occur occasionally. The old Catholic place of worship on which the future Jean-XXIII church rises was the victim of an attack three years ago. A Molotov cocktail thrown into its rooms caused only slight damage, but aroused considerable emotion. “At the time, all of the religious communities, with the Muslims first, supported us,” remembers Fr. de Bucy.

Today the situation is largely peaceful. “Our districts underwent an important policy of urban renewal,” the mayor (UMP) of Sartrouville, Pierre Fond, is happy to say. “Today they are starting to be sought by new tenants, because crime has greatly receded from the area.”

In the Plateau quarter, among la cité des Indes, la cité Gagarine, la cité Flaubert, and la cité du Tonnerre, the Muslim majority population does not express the least hostility towards the new church. On the contrary, the passers-by are even surprised by the absence of bell. “It is a little odd, a church without bell, isn’t it? “ asks Anounou, a 33 year-old Muslim.

A question which does not disturb Fr. de Bucy. Originally from Versailles, the young priest received his training at Val-Fourré, at Mantes-la-Jolie. Its church, located in the very heart of this difficult district, in the midst of the halal markets, did not have a bell, either.

12 thoughts on “The Silence of the Bells”