Reader Michaelk Borussia sends the following news stories from Germany, which he has kindly translated for us. In his introductory note he says: 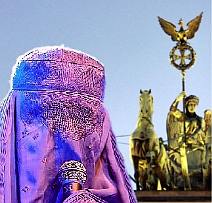 Here are reports of a typical day’s worth of Muslim crime in Berlin in particular, with one example from Munich. The point to keep in mind is that before the Muslims were here, this was a very safe city, and knife and gun attacks were very rare. It’s amazing to see the decline in public safety that has accompanied the Islamization of Germany. We still don’t have the problems that the Brits and the French have in their public housing complexes, but I think that’s just a question of time.

All these articles are from today’s edition (May 4th) of Berliner Morgenpost.

And here are the news stories themselves:

Police are investigating gang violence in Steglitz Berlin. The police still do not have any leads following a near fatal stabbing of a 16 year-old in Steglitz district on May Day. Meanwhile, the condition of Alexander T. from Lankwitz has slightly stabilised. The school pupil, however, is still in the emergency ward after two emergency operations at the Charité Campus-Benjamin Franklin hospital.

As reported earlier, Alexander T. and a friend had met on Tuesday afternoon. Both wanted to go to Leonoren street, where they met a group of Südländer [literally, Southerners, but the newspaper’s PC term to refer to Muslim criminals — translator]. The aggressive 15-17 year olds wanted to know whether Alexander T. was a ‘Thermo’, that is, a resident of a housing complex known as the ‘Thermometer’. Apparently the assailants thought he was a member of an opposing gang there—a mistake which nearly cost the life of the young man.

One of the attackers pulled his knife and stabbed T. The police arrested three youths in the vicinity of the crime. The youths were suspected of having participated in the attack, or knowing the identity of the assailants. They were interrogated that day but were released without charge.

The police spokesman did not want to confirm that the attack on Alexander T. is a sign of an escalating war between gangs from Lankwitz and Lichterfelde [districts in Berlin — translator], but he affirmed that ‘We are investigating in all directions”.

The ‘Thermometer housing complex’, which was built at the end of the 1960s in Lichterfelde district is a social flashpoint. It has a high immigrant population, as well as high incidences of drug-, weapons-, and violent crimes. Critically, the youth violence in the housing complex is influencing the social climate of the neighbourhood.

Father holds his son hostage: Mother forced to marry and relocate with him

Munich — In order to keep his former girlfriend near him, a man living in Munich has arranged for their son to be held as a hostage in Turkey for the last six months.

The Munich police reported on Thursday that a 55 year-old merchant from Afghanistan confessed he is having a nine year old boy being kept imprisoned in a secret location in Istanbul. All efforts to find the hiding place have failed so far. The man was expelled from Uzbekistan two years ago, and insisted that his 25 year-old younger wife and their son follow him. “The lady, a doctor, didn’t want to do so because the merchant’s other wife — now divorced — and eight children were already living there,” the police explained. So the man had the son kidnapped in the trunk of a car to Turkey, and insisted that the woman “marry him should she want to see her son again.”

The distressed mother married him and moved to Munich, but was only able to speak a few times with her son on the phone. She alerted the police, whereupon the 55 year-old was arrested. The police announced that he is terminally ill and that he “wants to take the secret of the son’s location with him into the grave so that the mother will never see the son again.” It is not clear what the captors will do to the boy when their employer dies, and the police have asked the public for their assistance in solving the case.

A man was critically injured last night during a violent argument between members of an extended Arab family. According to present reports, the fight was preceded by a verbal disagreement on the sidewalk of Huttenstrasse in Moabit. One of the men pulled his weapon and fired several times at his opponent, who collapsed on being shot in the chest. The injured man is being treated in the emergency ward, and it is not certain that he will survive the injury. The assailant was arrested; Second Murder Commission is investigating the case.

3 thoughts on “The Multicultural News From Berlin”