Copenhagen’s Little Mermaid seems to have converted to Islam overnight. According to yesterday’s Politiken (my translation):

The Little Mermaid in Muslim Clothing 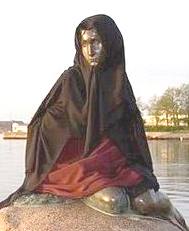 Police don’t know who clad the Little Mermaid during the night in a veil and long robe, but she has her clothes off again.

Unknown culprits culprits draped the mermaid in a black and burgundy costume, while her face was covered by a veil, declared the duty officer of the uniformed police.

Although there was no sign or other object on the mermaid, a deeper purpose is suggested by this action.

“She has just been uncovered again, and we will look into this further,” said the duty officer of the uniformed police.

Not the first time

The police have no idea who dressed up the mermaid in Muslim garb.

It was reported via the central alarm at 5:33 this morning by a man who had discovered “The Muslim Mermaid”.

This is not the first time that creative designers have caused the Little Mermaid to flirt with Islam.

In 2004 the mermaid was clothed in a burka with a caption “Turkey in the EU?”

– – – – – – – – – –
Will all this political theater cause the mermaid to moved to a more remote location? That’s a possibity, according to an article in the Copenhagen Post last year: 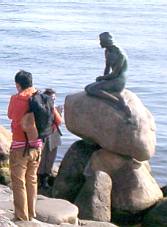 Imagine moving the Eiffel Tower a few metres further to the left, or the Statue of Liberty just a little closer to Manhattan. The City of Copenhagen is considering something similar for its own landmark — the Little Mermaid Statue.

As a way to protect the bronze statue from vandalism and reduce the wear and tear on it from tourists, the Copenhagen City Council is considering moving the 1.25m, 175kg statue a few metres further out into the water, Jyllands-Posten newspaper reported last week.

During the course of her life, the 93-year-old Little Mermaid, sitting on a rock in ankle-deep water on the Copenhagen waterfront, has suffered frequent acts of vandalism. It has been beheaded — three times, had an arm cut off and been blown off its rock by explosives.

Some free advice for the Danish authorities: treat Den Lille Havfrue the same way we treat our major monuments in Washington D.C.: Set up a 24/7 security cordon around her, with concrete barriers, X-ray devices, armed guards, and government agents who wand all the tourists who want to get near her.

4 thoughts on “The Little Muslima Mermaid?”