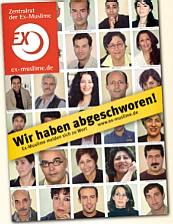 For some months I’ve been aware of the German group of Muslim apostates called Zentralrats der Ex-Muslime (the Central Council of Ex-Muslims) and their motto “Wir haben abgeschworen!” (“We have abjured!”) . I haven’t reported on them previously because the site is entirely in German, I read very little German, and machine translation simply isn’t good enough.

But our Swedish correspondent LN has recently brought to our attention an international group called Apostates of Islam, which has a website in English. These are courageous people who are willing to go on the record with their real names and photographs.

Their writings could get them killed. Some examples:

…Islam is a hoax, it is hallucination of a sick mind and nothing but lies and deceits.

We are apostates of Islam. We denounce Islam as a false doctrine of hate and terror. However we are not against Muslims who are our own kin and relatives. We do not advocate hate and violence. Muslims are the main victims of Islam. Our goal is to educate them and let them see the truth. We are against Islam and not the Muslims. We strive to bring the Muslims into the fold of humanity. Eradicate Islam so our people can be liberated, so they can prosper and break away from the pillory of Islam.

Islam is a religion that thrives on the arrogant assumption that it is the most logical, the most scientific and the most perfect religion. While the fact is that it is the stupidest doctrine — the most backward and absurd belief. Once the truth about Islam becomes common knowledge, it will be weakened and the Islamic fanaticism will lose its fangs. Hundreds of billions of dollars are being expended to combat Islamic terrorism, yet no effort is made to contain the ideology behind this terrorism. It is our belief that Islamic terrorism will not be eliminated unless and until the ideology behind it is exposed and eradicated. This is what we intend to do.

You’ll have to go over there and click the links to discover what their suggestions are.