UPDATE: Be sure to read the thoughtful comment on this post. Some person of unidentified origins left his…opinion. It’s so edifying to read “this sucks” in a comment. It adds so much to the conversation. –D

This is the reply to one of our commenters today who suggested we get used to things or do something about them. If you feel that way, too, join the Center for Vigilant Freedom and offer your services.] 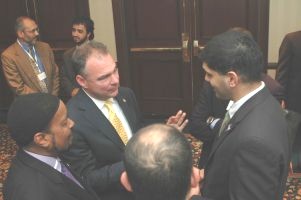 This last weekend, the Commonwealth of Virginia was signed over to the Muslim Brotherhood, care of the Muslim American Society (MAS). Kaine must be hoping for a VP nomination from Obama — after all, if the Democrat Party presidential ticket needs a Southerner, he’d better prove his dhimmitudiness early in the game.

He gave the keynote speech at the local Muslim American Society Freedom Foundation dinner. A real team player, he’s just following Nancy Pelosi’s (D-CA) game plan from her Syria visit, and Steny Hoyer’s (D-MD) charm offensive with the Muslim Brotherhood in Egypt. With very little effort, his staff could have researched the connections of the MAS to the Muslim Brotherhood and some extreme jihadist doctrine. We have to assume this is a choice, not a mistake. Good to get to know you, governor…

Here’s some background on the Muslim American Society for Virginians. We live in occupied territory in this information war, and it’s about time we began winning some of it back from the occupiers:

A Chicago Tribune (subscription required) article describes the Muslim Brotherhood deciding to operate in the U.S. as the Muslim American Society:

Shaker Elsayed, a top MAS official, says the organization was founded by Brotherhood members but has evolved to include Muslims from various backgrounds and ideologies.

“Ikhwan [Brotherhood] members founded MAS, but MAS went way beyond that point of conception,” he says.

Way beyond indeed. The Brotherhood probably thought they wouldn’t get Virginia for another decade or two, but then they hadn’t planned on this level of help from Kaine.

A Weekly Standard article “MAS’s Muslim Brotherhood Problem,” quotes from MAS curricula. Although MAS has removed the links in that article, the same curricula is still available here at the San Diego MAS website — including as part of the Level I MAS required reading, the Muslim Brotherhood Project document, Milestones by Sayyid Qutb . Visit the link before they hide it again…Here, from the Weekly Standard article — a position that Kaine apparently has adopted as part of the 2008 Virginia Democratic Party platform:

For example, MAS requires all its adjunct members to read Fathi Yakun’s book To Be a Muslim. In that volume, Yakun spells out his expansive agenda: “Until the nations of the world have functionally Islamic governments, every individual who is careless or lazy in working for Islam is sinful.”

And also on that MAS curricula, the writings of Imam Hassan Al-Banna, who teaches the following (and yes, it will be on the final exam for All governors aiming for Democrat Party President/VP primaries, not just early adopters of salafism like Tim Kaine):

Reforming the government so that it may become a truly Islamic government, performing as a servant to the nation in the interest of the people. By Islamic government I mean a government whose officers are Muslims who perform the obligatory duties of Islam, who do not make public their disobedience, and who enforce the rules and teachings of Islam.

There is no problem if the Islamic government utilises the services of non Muslims when necessary, so long as they do not offer them positions of leadership. Islam is flexible as to shape and detailed structure of the government, but it must be in agreement with the general principles of the Islamic ruling system.

Or this letter to the Washington Post by the head of MAS, Esam Omeish, praising the Muslim Brotherhood:

The influence of Muslim Brotherhood ideas has been instrumental in defining our understanding of Islam within the American and Western context …..

In the Name of Allah, Most Gracious, Most Merciful
Governor of Virginia Gives Keynote Speech at MAS Freedom Foundation Standing for Justice Award Dinner

The governor, joined by members of his cabinet, spoke individually with Muslim community leaders during a special leadership reception. The reception was followed by the Freedom Foundation Award Dinner.

In an occasion marking the first public speech to a Muslim gathering by a Virginia governor, he acknowledged the civic work and civil rights accomplishments of the Freedom Foundation, and stressed the need for people of all faith traditions to work together to overcome intolerance and bigotry.

Imam Sheikh Rashid Lamptey of the Muslim Association of Virginia (MAV) gave a powerful inspirational address that stressed civic participation as an essential dimension of the Muslim faith and our contribution to the larger society.

The 2007 MAS Freedom Foundation awards and their recipients included:

The evening ended with the presentation of a free Hajj package and entertainment by Preacher Moss of the Allah Made Me Funny comedy tour.