She should not have survived, this resilient one. But she not only made it out of hell, she flourished in spite of what anyone would have predicted. 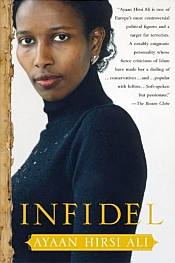 Ayaan Hirsi Ali is a remarkable person. Her autobiography, “Infidel”, is an extraordinary tale, even though the title is a misnomer. The book should have been called “Apostate,” for that is now her Muslim identity. If she were merely an infidel, her rise from dirt-poor Somalia to the Dutch parliament would not be nearly so interesting.

Perhaps the publishers thought we infidels wouldn’t know the difference between the two designations. However, the reality of her success has made her a marked woman precisely because her unforgivable sin and the shame she has brought on her family is directly due to her flight from Islam, i.e., her apostasy. Were she merely an infidel, her ignorance could be excused; the fundamentalists wouldn’t care.

This is a story of faith: its devout practice, and then the shedding of it when Ali came into contact with the Western world. As an adolescent she was as pious as Mary Theresa, the girl in my class who went on to become a nun. The Muslim Brotherhood’s teachings came to her neighborhood and Ali became one of their most devout practitioners:

I began praying in the evenings sometimes. It is a long ritual. First you wash and cover yourself in the long white cloth, fixing your gaze to the floor because Allah is present and you do not look God in the eye. You recite the opening chapter of the Quran… Then you prostrate yourself, with your palms open toward Mecca, the heartland of religion. You say Praise to Allah, and stand up again; you say another verse of the Quran — you are free to choose which verse. You repeat the whole procedure, two, three of four times, depending on what time of day it is… Then you sit and end the prayer by looking sideways, first right and then left, and you cup your hands together and ask for God’s blessing. You beg: Allah make me wise, forgive my sins. Bless my parents and give them health, and please Allah, put my parents in Paradise. Please Allah, keep me on the safe path.

Prayer is a long procedure, and it is required five times a day. In the beginning I almost never managed to do all of it, but it felt good to be trying.

Ali’s mentor in this progression was Sister Aziza, who had formerly lived in the world (she held jobs as an airline attendant and a bank teller) but had turned her back on all that to become a teacher at the Muslim Girls’ school that Ali attended. Her impact was a revelation for Ali’s sixteen-year-old yearning adolescence:

Sister Aziza was different from any other teacher we had ever had. For one thing, she wanted to be called by her first name, Sister Aziza, rather than Miss Said. For another, she was veiled. Not just with a headscarf, which many teachers wore; Sister Aziza cloaked herself in full hijab. Thick black cloth fell from the top of her head to the tips of her gloves and the very limit of her toes. It was spectacular. Her pale, heart-shaped face stood out against a sea of black… and he had a smile in her eyes. She never shouted the way the other teachers did.

Is it any wonder that Ali became enthralled with this beautiful woman, the apex of Muslim femininity?

Her classes were compelling, but I didn’t become an instant convert. And what was so great about Sister Aziza was that she didn’t mind… She told us God didn’t want us to do anything — not even pray — without the inner intention. He wanted true, deep submission: this is the meaning of Islam. “This is how Allah and the Prophet want us to dress,” she told us. But you should do it only when you’re ready … ”

As women, we were immensely powerful, Sister Aziza explained. The way Allah had created us, our hair, our nails, our heels, our neck, and ankles — every little curve in our body was arousing… only the robe worn by the wives of the Prophet could prevent us from arousing men and leading society into fitna, uncontrollable confusion and social chaos.

She was strict about obedience and hygiene. Every month, Sister Aziza told us we must shave our underarms and pubic hair to make ourselves pure. We must purify ourselves after our periods. Womanhood was both irresistibly desirable and essentially filthy, and all these interventions were necessary to earn Allah’s pleasure.

… there were two kinds of struggle for Allah and the first effort was the jihad within ourselves: submission of our will. We must want to obey our parents and to behave in a manner that spreads kindness.

Ayaan Hirsi Ali was hooked. She asked her mother for money to have the tailor make a hijab of her own. She began wearing it to school:

It had a thrill to it, a sensuous feeling. It made me feel powerful: underneath this screen lay a previously unsuspected, but potentially lethal, femininity… I was unique… Weirdly, it made me feel like an individual. It sent out a message of superiority: I was the one true Muslim… I was a star of God. When I spread out my hands I felt like I could fly.

Anyone who has raised a teenager knows full well this stage of self-absorbed search for an identity. Hirsi Ali had found her answers to the questions of “who am I?” Of course, it didn’t last terribly long — the stumbling block for her was the necessity for an unreciprocated obedience to a man. Even in Somalia she had somehow absorbed the notion of equality; if she must obey her husband, then he too must obey her. It proved to be a fatal contradiction in the life she was constructing for herself.
– – – – – – – – – –
Hirsi Ali’s brutal treatment at the hands of her frustrated and abandoned mother — the constant beatings while being tied up, the rage that filled their home — brought her to a decision: her mother had been caught up in this world and then abandoned by Ali’s father; she vowed this would never happen to her:

I was beginning to rebel internally against women’s traditional subjugation. In those days, I was still wearing a hidjab. I thought a lot about God, how to be good in His eyes, and about the beauty of obedience and submission. I tried to still my mind so it would become a simple vessel for the will of Allah… But my mind seemed bent on being distracted from the Straight Path.

You could see where this “small spark of independence” would lead. She simply could not “comprehend the unfairness of the rules, especially for women.”

It is important to know this Ayaan Hirsi Magan before she metamorphoses into Ayaan Hirsi Ali (her grandfather’s name). Without their childhood stories we cannot truly understand the adults we think we know. She took her grandfather’s name to avoid being tracked down by her father’s relatives when she escaped from an arranged marriage to a Canadian Muslim and jumped the train to land in Holland as a would-be refugee.

Her success in her new country is also remarkable, especially when you consider the odds against a Somalian refugee ending up as a member of the Dutch Parliament for seven years. The fact that she was eventually hounded out of the country, living under constant security because of the hatred the fundamentalists had for this uppity apostate, does not make her life there a failure.

During her life in Holland, Ali shed her Muslim faith and became an atheist. That part of her journey seems fated: once the fire has been extinguished, it cannot be lit again. So she sets out to discover what her life will be as a non-believer. In the book at least, she appears not to have a quarrel with religion per se, though she is suspicious of any inroads it might make into political life. One can hardly blame her. However, the limits of her personal history are visible here: she doesn’t know enough history to understand that the religious impulse can be retained without harming the commonweal. The consuming, all-or-nothing Islam of her childhood predestines her passage from all to nothing. That is the pity of fundamentalism of any sort.

So now she lives here in the U.S., working for the Heritage Foundation. Given her leftist leanings, it is an odd match, but I think it will be a fruitful one.

Yes, she still lives a guarded life. Like Salman Rushdie, she will never be entirely safe. But this is a resilient woman. Wherever she goes, however many times she has to re-invent her life, Ali will land on her feet, orient herself and keep going.

As I said in the beginning, Ayaan Hirsi (Magan) Ali is a remarkable person. Reading her life will leave you pondering your own.