The jury at the Old Bailey has at last returned a verdict: the five British Al-Qaeda conspiracy will get life in prison: 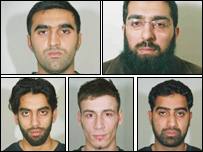 Five men have been jailed for life for a UK bomb plot linked to al-Qaeda that could have killed hundreds of people.

Jurors in the year-long Old Bailey trial heard of plans to target a shopping centre, nightclub and the gas network with a giant fertiliser bomb.

The judge, Sir Michael Astill, said the men, all British citizens, had “betrayed their country”.

It has also been revealed some of the plotters met two of the 7 July London suicide bombers.

Mohammad Sidique Khan was spotted on four occasions in 2004 with at least one of the fertiliser bomb conspirators. At one point MI5 officers followed Khan back to his home in Leeds but no further action was taken.

In the wake of the convictions both the Conservatives and the Liberal Democrats have both called for an independent inquiry into the 7 July link.

The call for an inquiry was echoed by Graham Foulkes, whose son David died in the 7 July attacks. He said an inquiry was needed so “lessons could be learned”.

Later, in the House of Commons, the Home Secretary, John Reid, ruled out an inquiry, saying it would divert the efforts of those in the security services who were so busy countering the terrorist threat.

Hmm… this is redolent of the 9-11 Commission. Independent inquiries are not something a government minister wants to contemplate.

Britain’s top anti-terrorist policeman, Deputy Assistant Commissioner Peter Clarke, said: “This was not a group of youthful idealists. They were trained, dedicated, ruthless terrorists who were obviously planning to carry out an attack against the British public.”

Police smashed the plot in 2004 after MI5 had watched an Islamist extremist network with links across the world.

The link with 7 July was deliberately kept from the Old Bailey jury for fear of prejudicing their deliberations on the fertiliser bomb plot.

The judge told them: “You have betrayed this country that has given you every opportunity.”

He also warned them: “All of you may never be released. It’s not a foregone conclusion.”

“May never be released”? What does that mean?

British readers are invited to weigh in with their opinions about how long these animals are likely to remain incarcerated. In the USA, parole opportunities would vary from state to state, and would depend on the terms of the sentencing. Sometimes it really is life without parole; sometimes they get out in twelve or fifteen years.

In any case, this is pretty stringent sentencing by European standards.

3 thoughts on “The Al-Qaeda Five Get Life”