The future Baron had an eye-opening experience last night. Here’s his redacted email, protecting the innocent and the guilty:

I know it’s late, but I thought you might “like” to hear about this. I had a fairly frightening experience with a young liberal co-ed tonight. 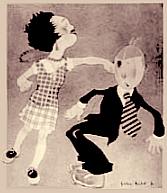 This intoxicated young woman suddenly attacked me, trying to take the gun…

When I wouldn’t let her take it, she grabbed my glasses instead. Afraid she might break them; I grabbed her arm — without hurting her — and took my glasses back. At which point the girl said:

“I could call the police.”

I was mystified. “About what?”

I looked at her, up and down. “There aren’t any marks on you.”

She drew her own fingernails down her skin. “Not yet. There could be.”

At that point I decided —

But I think this is an example of a perspective endemic on college campuses: the police aren’t there to protect you; they’re there to help enforce petty vendettas on men. Rather than stand on their own two feet, women are relying on men to help them out against other men.

If that’s not sexist and establishing women as an inferior, weaker, species, I don’t know what is.

Needless to say, I had visions of the future Baron being hauled off to the hoosegow with expensive legal proceedings to follow. As you may recall, this kind of thing has happened before at his school.

I called him this morning to suggest that he at least make a “concerned report.” He waved away my worries, assuring me that she wasn’t invited to the party in the first place, and that she was far too intoxicated to recall the events of last night.

I am no so sanguine as he, especially after he related a later incident in which he had to remove her and her boyfriend from his bedroom where they claimed to be “dancing.” After he managed to extract them from his room, he locked the door against future intrusions.

Feminism is a snake pit now. It exists solely to promote abortion rallies and arrange emasculation events. The average guy has no idea when his very own borking experience is going to hit him upside the head.

Since these attacks come out of the blue, the safest place today is a monastery.

This will suit the women fine, until they discover they’re not allowed in. Then it will be choruses of “No Fair!” followed with an investigation by the Equal Opportunity Employment Commission.

Welcome, my son, to the new and darker Dark Ages.

10 thoughts on “Making The Modern Case for Monasticism”