Mark Humphrys, do you know about this?

The Royal College of Surgeons in Ireland has just achieved official dhimmi status, sliding by under the banner of “Accommodation.” Caving in can take any number of forms, but this one seems particularly bizarre in a modern hospital.

The Royal College of Surgeons has confirmed that it is planning to build new facilities on its premises so that Muslims do not have to face Mecca while sitting on the loo.

The Islamic toilets, which will be situated in the Smurfit Building in Beaumont Hospital, will have the same specifications as Muslim toilets throughout the world.

The toilets are being built in accordance with the Islamic faith to facilitate the sizeable number of Muslims who regularly use the Royal College of Surgeons building.

Speaking about the new plans, a spokesman for the College said: “The wash room facilities proposed for the new building in Beaumont Hospital have been specifically designed in order to accommodate the cultural diversity of all of our students.

“We have received no formal requests. It is just to respect the cultural diversity of our student population.”

Hmmm… I wonder what Saudi prince is funding this operation? 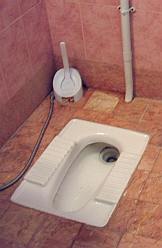 Did you know there’s a whole wiki page devoted to Muslim toilet habits? Don’t convert or you’ll feel like you’re being potty-trained all over again:

The Islamic faith has particular rules regarding personal hygiene when going to the toilet. This code is known as Qadaahul Haajah and is extremely prescriptive. The rules were established during times before the invention of toilet paper or toilet seats. In many parts of the Muslim World, squat toilets are the norm and toilet paper remains rare and its use a matter of dispute.

“Prescriptive?” Good heavens, is there no place you can go where Allah is not watching? Here are the rules his followers have devised to keep people in line (this stuff is not found in the Koran; it’s just busywork for imams who need to get a real job):
– – – – – – – – – –

This informative wiki has this proviso:

Note that it is known that many of these rules are not compulsory to all Muslims and fall into the category of the Sunnah, though it may be compulsory to just the Muslims that are in Mecca itself near the Ka’aba. As a further note many people believe that many points mentioned today are outdated since in modern times toilets have become clean tiled areas compared to thousands of years ago when they were confined areas in the desert.

Right. But I’ll bet the group of Wahhabists who funded the useful idiots at the Royal College of Surgeons in Ireland didn’t let on to those in charge that there was any optional part of this complicated routine.

God help the good citizens of Michigan if Conyers catches wind of this “innovation.”