Update and Correction: the felonious attack on the Bakers’ Dozen choral group was not politically motivated at all. They were not beaten up for singing the national anthem, as I originally posted. 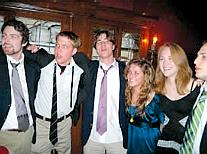 Instead, it seems that the unprovoked beatings were due to some overgrown children with a toxic mixture of too much testosterone and alcohol, and not enough sense (I am deducing the alcohol, given the backgrounds and ages of the miscreants).

The story is still much the same, though the attackers’ motivations are much clearer and more detailed:

The alleged assault [note: the assault is not “alleged.” The allegations are confined to the individuals who took part in it. The broken jaw that resulted is not alleged either –D] on Yale’s a cappella choral group Baker’s Dozen may have stemmed in part from a rivalry between two San Francisco Catholic high schools with a history of tension, the mother of the party’s hostess said Wednesday. One singer, 18-year-old Sharyar Aziz, had his jaw broken during the attack.

“It was a quote-unquote S.I. party,” said Leanna Dawydiak, whose daughter, Rose, a Yale student and St. Ignatius College Preparatory alumnus, co-hosted the party. The uninvited aggressors, Dawydiak said, were either students or recent alumni from Sacred Heart Cathedral Preparatory, a rival of St. Ignatius.

…During the party, at which the sport coat-clad group led a sing-along of the Star Spangled Banner, some guests began taunting them, hurling epithets like “faggot” and “homo.” One guest, whom Dawydiak identified as the son of a prominent pediatrician and a Sacred Heart alum, apparently led the jeering.

The singers decided to leave when it didn’t appear the animosity would let up, traveling in small groups to the house around the corner where they were staying, sources said. But when they reached the corner of 15th Avenue and California Street, a group of young men jumped out of a van and began to attack them, tripping Sharyar Aziz and kicking him…

It also appears that the police are going to pursue this case more aggressively than seemed to be the case when the story first came out:

“The initial call was of a fight amongst 20 people, so numerous people have been interviewed and there are more people who need to be interviewed,” police Sgt. Neville Gittens said Wednesday. He said the issue of whether the students would return to view the lineup or if inspectors would head south was “being worked out as we speak.”

And even as I write, I apologize to all patriotic San Franciscans for believing the original reports that the attack was due to the Bakers Dozen having sung “The Star Spangled Banner.” Those boys probably don’t even give a damn. They were simply jealous of all the attention the singers were getting.

I should have known. One of my family members is a musician and I must say, the girls do flock, and the boys do fume – sometimes it just seems to be part and parcel of many gigs. Add alcohol to the mix and immature male jealousy can get out of hand, just like it did here.