An a cappella group from Yale, on a between-semester tour on the West Coast, was attacked after singing our national anthem at a private party on New Year’s Eve. 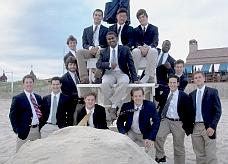 Members of the Baker’s Dozen a cappella singing group were visiting San Francisco as part of their winter tour. The students attended a party hosted by the daughter of Reno Rapagnani, a retired lawyer for the San Francisco Police Department, at his house.

The men had just sung the “Star Spangled Banner,” according to the father of one of the singers, when they prepared to leave.

But then, a group of uninvited guests then became hostile, according to Whitney Leigh, lawyer for several of the singers. Those guests, who were not provoked, Leigh said, then called for back-up.

The singers were leaving the party when they were attacked by 15 to 20 people as they got out of their vehicles. The alleged assailants had been called to the party “with the purpose of attacking these men,” Leigh said.

It would seem that in addition to its other lunacies, San Francisco is definitely a no-go area for anyone wishing to sing patriotic songs — even in the privacy of someone’s home.
– — – — – — – — – –
What makes the story creepier is the failure — so far — of the authorities to charge anyone with felony assault. This despite the fact that one member had his jaw broken in two places, and the additional fact that four attackers were detained by the police at the time:

“The doctors’ reports suggest his jaw was broken by a blunt instrument or someone well trained as a fighter,” the elder Aziz said.

His son was [un]able to comment because his jaw was wired shut after having reconstructive surgery, placing two metal places on his jaw that would stay there forever, his father said.

Besides Aziz’ jaw being broken, several kids walked away with black eyes and bruises covering their bodies, his father said.

The police were called and broke up the fight and detained four suspected. However, no arrests were made that evening, and have yet to be made more than 10 days after the incident, according to Aziz.

There is local outrage, and much speculation, as to why the prosecutors have failed to issue warrants:

Local news reports speculate that no arrests have been made because the main suspect in the attack is reportedly the son of a prominent local physician.

“I don’t want to speculate as to why [an arrest hasn’t been made.] I do know that in my 20 years as a criminal defense attorney, I don’t recall an incident in which a brutal attack on multiple people would result with a quick detention and release,” Leigh said.

We all know there are several tiers of “justice” — such inequalities persist in every society that has ever existed. In fact, I’ve often suspected that Justice wears a blindfold so she won’t have to see the miscarriages issued in her name.

This one is particularly egregious. On the other hand, they’re up against Yale, which is known for protecting its own.

Wouldn’t you love to know why this isn’t being pursued? Who owes whom? Who is running for what office? Just a few questions to start the debate.

Meanwhile, in the loud silence from the legal beagles in San Francisco, can you hear the echoes of the persecution of those athletes at Duke? Obviously none of them had a “prominent local physician” as one of their daddies.

Looks like it’s time to call on San Francisco’s congressional representative to get things rolling. Let’s see, that’s…oh, right: the “most powerful woman in America.” Calling Grandmother Pelosi, calling Nancy P: there’s a mess back home you need to attend to as promptly as possible. Otherwise, some of the stains may end up on your skirt.

Her note says that “the rules of Congressional courtesy prevent Rep. Pelosi from replying to emails if she cannot determine that you are a constituent.” But then, you don’t need her to reply. You just need your national Speaker of the House to use part of her one hundred hours to bring a little justice back home.

(My word, the speaker has a whole floor to herself… well, of course, it is only fitting that the most powerful woman in America needs this kind of elbow room.) Sorry, there doesn’t seem to be a fax available.

Remember, if you write her office, be civil. Same goes for email — who needs a response anyway? Be daring and use email even if you’re not a local constituent. You might remind her, of course, that as Speaker of the House, she has a national obligation.

And if you should decide to call, why not try singing our — and her — national anthem. Just for fun.

And for justice for those boys in The Bakers Dozen. According to their website, the most seriously injured boy, Sharyar Aziz, was a freshman who’d only begun singing with them in October.

Cheer them up and go to the website to purchase one of their CDs. The second one down on the shopping page has their version of “The Star Spangled Banner.”

If you’re in ’Frisco, play it real loud.

10 thoughts on “Jaw Breaking and The Star Spangled Banner”