The eleven Iraqis captured in Mexico are not terrorists. No bombs, no jihad. Just some fervent Christian prayers that they won’t be sent back to die. Here’s the bare bones story, from a UPI report in The Washington Times:

Jesus Gerardo Lopez, the top immigration official in Coahuila state, told a correspondent from the San Antonio Express News none of the nine men, two women and a 2-year-old girl were on any list of terror suspects, although he said the FBI, CIA and Interpol were alerted to the arrests.

Investigators said they determined the fake passports had been issued in Turkey and Cyprus, the newspaper said. During interrogation, group members said they had each paid as much as $10,000 for the passports and new identities that said they were Christian refugees fleeing the war in Iraq.

The group had planned to enter the United States at San Diego, Calif.

Lopez said under Mexican law, the group can be held for up to 90 days while being investigated and could face fines on charges of illegal entry to Mexico and possible criminal charges for the fake identification. He said it was also possible they would be considered for asylum if they sought it. 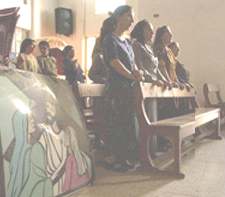 There are two stories here: the Iraqi Christian communities in America that these people were probably headed to, and the situation for religious minorities in Iraq, some of them more ancient than the Islamic armies that overran them centuries ago.

Here’s one view, from America:

For the past three years, Raad Khalaf has worried that every phone call to his suburban San Diego home would bring bad news about his sister in Baghdad.

On Friday, the phone rang with good news instead: His sister had reached Dubai on a temporary visa, joining the growing flight of Christians from the relentless violence in Iraq.

“Now the question is what happens when the visa expires,” said Khalaf, an insurance broker who arrived in San Diego decades ago by way of Paris. “This is a remedy, but it’s not a permanent solution.”

Expatriate Iraqi Christians living in the U.S. — a community that estimates its size at about 200,000 — disagree about how best to help families in the Middle East targeted in sectarian violence.

Some would like to see visa restrictions relaxed so their relatives can join them in the U.S., where enclaves of Iraqi Christians have formed in Detroit, Chicago, San Diego and Phoenix. Others call for the creation of an independent administrative zone in the northern Nineveh area, the ancestral homeland of Iraq’s Catholic and Eastern Orthodox Christians — mainly ethnic Assyrians and Chaldeans who proudly trace their lineage to Babylonian times.

“As a people, we survived the Mongols, the Turks and the Arabs,” said John Michael, a Chicago ophthalmologist whose cousins recently left for Syria. “We don’t want this violence now to be the death knell of this ancient culture.”

Christians have been targeted by militias for murder and kidnapping — in part, some say, because many are likely to have family abroad able to pay ransom demands as high as $50,000.

And here is testimony before Congress last month by Nina Shea, Director of The Center For Religious Freedom: [the emphases are mine -D]

Egregious religious persecution occurs in North Korea, Saudi Arabia, China, Vietnam, Eritrea, Iran, Sudan and several other countries officially designated by the State Department as “Countries of Particular Concern,” and is being addressed by the other witnesses today. There is an additional country where religious groups of various faiths face some of the bloodiest persecution in the world today, a country that is not listed among the CPC’s. It is Iraq, and it is on this country, and particularly on the persecution faced by Iraq’s smallest, most vulnerable minorities, that I will direct my testimony.

We should view Iraq’s smallest religious minorities — the Christians, Yizidis, Mandeans, Baha’is, Kaka’i and Jews — as we once did Soviet Jews. The persecution these small minorities face stands out against even the horrific violence now wracking the rest of the population. This is demonstrated by the stark statistic that an estimated half of the members of the small minorities have been driven from their homes in the past two or three years, either to other parts of the country or abroad. Their very survival as communities within Iraq is now threatened by what amounts to ethnic, or rather cultural, cleansing. The State Department’s Religious Freedom Reports accurately depicts a defenseless non-Muslim population that is being pounded by all other factions. Al Qaeda terrorists, Sunni insurgents, Shiite militias, Kurdish militants, and criminal gangs all persecute and prey on these small religious minorities.

Their situation is unique: Their religion and culture identifies them with the “infidel occupiers” in the minds of the extremists, and lacking the militias, tribal structures and foreign champions of Iraq’s other groups, they are singularly defenseless against the mayhem that has followed the occupation. Because they do not govern any department, they are at the tender mercies of those dominant groups who aim to take their property, businesses and villages. The United States has a great moral responsibility to address their plight, and specific policy actions are required to help them. These policies will differ from the efforts we once took on behalf of Soviet Jews. Most of these small minority people do not wish to leave Iraq. We must expeditiously take actions that will maximize their security within Iraq, and will draw back some of those who have taken temporary shelter in other surrounding countries. For the most desperate among them, we must begin to resettle them here, where many, if not most, already have relatives who are well established.

…their situation is not being sufficiently addressed by U.S. policy and was all but ignored in the recent Iraq Study Group Report. The very fact of their defenselessness — they are persecuted and killed, but do not themselves persecute and kill — contributes to the inverse relationship between their suffering and the world apathy at their situation.

…after the Iraq Study Group made its report, I had asked [a] question of James Baker and Lee Hamilton, the authors of the report…

“You have made no mention of 10% of the population of Iraq, the indigenous people of Iraq, the Assyrian Christians ! The Iraqi Government has recently promised them a province in their homeland. What are you going to do for them ?”

Then I began to realize something important. The Assyrian Christians had been shut out from the discussions, the maps and all else was for two reasons.

First, they are Christians and they don’t make bombs, abuse their women and fight against the world.

Second, though and more troubling, is that nobody fights for them.

The discussion went to the Shia and the Sunni and the Kurds and on and on. They were the center of attention because they are destroying each other, have militias and push their way around.

The most important people in Iraq, the people for whom much of the world is indebted for their faith, the first Christian nation on earth, were being completely ignored.

As the program finished and the people began to leave, one man came up to me and said “You are always here like this, aren’t you ? You are doing a good job for your people. Let me know what we can do to help.”

No, it was a staffer from the Iraqi Embassy.

This flight of Christians and Jews from their homelands has been going on for a long time. The arbitrary “states” the British and French created only accelerated the process. The British Mandate of Mesopotamia makes for queasy reading.

Now, almost ninety years later, the erasure of Christians and Jews is proceeding even faster than it did under the Ottoman Empire.

Down the generations, the sins of the European colonial fathers continue to haunt the world. And America is branded “imperialist” for wanting to contain this virulence, when in actuality it is a miracle that we were ever able to break free of Old Europe in the first place.

Meanwhile there are eleven illegal aliens in custody in Mexico City tonight. They could use your prayers.

3 thoughts on “Eleven Iraqis in Mexico”