Congressman Virgil Goode is getting treatment straight out of the CAIR playbook: 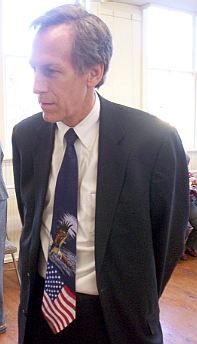 We saw steps 1 through 4 in action yesterday and the day before. Today it’s time for Step 5. According to The Martinsville Bulletin:

Asked at the press conference whether he had received any death threats, Goode responded, “No comment.”

Read the rest of the article — it’s an AP story, so you’ll find all the other steps highlighted, with the general MSM stance clearly laid out, in full Useful Idiot mode.
– – – – – – – – – –
Rep. Goode may not stand a chance, but we’re going to back him to the hilt here. The man has touched the new third rail of American politics: He dissed the Prophet.

Regular readers will guess that we don’t support the exact way that our congressman stated his opinion, but we wholeheartedly back the sentiment behind it. And if we get a chance to talk to him, we’ll offer him some advice about how to wage the Counterjihad effectively, without offering the enemy any gaps in the armor through which he can slip a blade.

I spoke to one of Rep. Goode’s staffers in a satellite office this morning, and he said the phones have been ringing constantly, and that’s he’s never seen anything like it before.

Don’t let CAIR force him to back down. If they succeed, no politician holding national office will be willing to stand up to them.

Snail-mail works best. Send a letter of support to The Hon. Virgil H. Goode Jr. at one of the addresses listed below. Tell him Gates of Vienna sent you. He calls us by our real names, but he’ll know who you mean…

UPDATE: Dymphna reminds me that you should not use the Washington D.C. address. Mail arriving at his Congressional office gets quarantined for three weeks.

Rep. Goode recommends that correspondents use the Rocky Mount address for the speediest delivery.