Update 12/6/06 9:30am: This story has been confirmed by a reliable source in Denmark, one whose information I trust.

This video was was sent to us from Germany by “Odin Woden”. Here’s what the note accompanying it said:

Danish residents use pig blood to deter building of mosque

Copenhagen 4 December 2006 — Last night some people protested against the construction of Mosques on European soil by defiling a proposed site with pigs blood.

A bag filled with Pig’s blood was splattered at the ground of a planed mosque in Copenhagen.

A video of the act — showing the men pouring a red liquid on the ground, and speaking in English, was released to the media, anonymously…

I have no way to authenticate this video, and do not vouch for it. But it’s an intriguing story.

On the face of it, this looks pretty barbaric. Why would people be opposed to the building of mosques in Europe? Could it be that the heart of such dissent lies in the history of what Islam has done to Christian churches wherever it has gone?

Why don’t we make a deal… say, a church for each mosque. We could start with this one. They can trade us the Hagia Sophia for ten mosques, for surely it is worth that much, if not more. 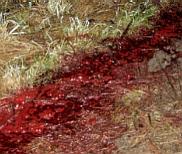 I don’t abide with desecrating other religions’ places of worship, but the Christian cheek has been turned long enough. Time to give back some of the stolen goods. And what more fitting place to start than Turkey, which wants entry into the EU?

Does Christendom have any mosques-turned-into-churches? I wonder why not.

I don’t blame these vandals, but like the invisible moderate Muslim, I don’t approve, either.

Let’s start some trading instead.