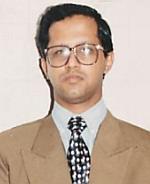 Salah Uddin Shoaib Choudhury is on trial for his life.

What was his crime? Robbing and killing shopkeepers? Raping schoolgirls? Plotting the overthrow of the government?

No, Mr. Choudhury faces the death penalty for advocating better relations with the state of Israel, and for saying nice things about Christians.

You see, Mr. Choudhury is a Bangladeshi journalist, and, in Bangladesh, printing such opinions “defames Islam”. It is considered sedition, and is a capital offense.

According to the Asian Tribune:

Choudhury has been under attack by his government for publishing articles that warned his country about the growth of radical Islamists there, urged Bangladesh to recognize Israel, and advocated genuine interfaith dialogue based on religious equality and mutual respect. For these “crimes,” he was arrested and tortured and his family harassed.

When his younger brother, Sohail Choudhury, went to the police to complain that he was beaten, they responded that it was the Choudhurys’ fault for their “alliance with the Jews.” Even after we were successful in getting him released from prison, Choudhury faced continued harassment from the Bangladeshi government and Islamist radicals.

Europe, Bangladesh. Different continent, same message: If only you would stop being so friendly with the Jews, we wouldn’t have to hurt you.
– – – – – – – – – –
Moderate Muslims are considered to be rare birds, but Mr. Choudhury is one of them. His investigative journalism found no takers in the established Bangladeshi press, so he founded his own newspaper, The Weekly Blitz, and published news and opinion as he saw fit. The consequences he has since faced illustrate why most moderate Muslims remain silent:

The government “discouraged” advertisement in Choudhury’s paper, Weekly Blitz; it refused to let him travel and for a while held his passport. Thugs — including members of the Bangladesh Nationalist Party (BNP) — beat and threatened him while police aware of the attacks, did nothing. In fact, after one beating, the police went after Choudhury and let the attackers occupy his newspaper office.

Then on September 18, 2006, a judge with Islamist connections ruled that Choudhury would stand trial for “Sedition, Treason, and Blasphemy.” “By praising Christianity and Judaism,” the judge and prosecutor said, Choudhury “hurt Islam… and by [calling for] relations between Bangladesh and Israel [he] offended the sentiments of Muslims.” For this Choudhury could lose his life.

Mr. Choudhury has been consistently critical of the radical strain of Islam that has been on the rise lately in Bangladesh. The Australian tells the story:

From his home in Dhaka he told The Australian he watched, with apprehension, the massive expansion of what he calls kindergarten madrassas. “I discovered they were teaching almost the same thing that was being taught in the other madrassas, spreading the message of religious hatred and jihad.” He is talking about children as young as five to up to 18 from both poor and affluent families being indoctrinated with Islamist revolution and the implementation of sharia law.

When mainstream newspapers refused to carry his investigative reports, he set up The Weekly Blitz. From May 2003, his newspaper, handed out in local markets and published online to an international audience, carried reports on the rise of Islamic militancy in Bangladesh and the propaganda campaign waged against Jews. Choudhury pressed for inter-faith dialogue between Jews and Muslims. Soon enough he started receiving threats from local radicals on a daily basis.

The political situation in Bangladesh has denied Mr. Choudhury any protection from the state. An interim government, under a supposedly moderate party, is in charge of Bangladesh pending elections early next year. But the government depends upon a coalition which includes two Islamist parties, and the Islamists are widely expected to gain in the next elections.

As a result, no one within the existing political structure is eager to come to Mr. Choudhury’s aid.

Two months after his release from prison on bail, a radical sheik phoned Choudhury, threatening his life and telling him his office would be bombed. Choudhury told the police but they did nothing. A few days later, in early July, Choudhury’s office was bombed. No arrests were made. Two months later, when Choudhury’s case came to court, the prosecution admitted there was no evidence. But the judge, who is associated with a radical Islamist party, decided the trial for sedition would proceed.

In the past I have bemoaned the lack of audible opposition to the Jihad by moderate Muslims. Well, it seems I just wasn’t listening closely enough, because Salah Choudhury has been willing to put his life on the line since at least 2003 in order to oppose the Islamists.

The New York Sun gave this account of an interview with Mr.Choudhury:

Why hasn’t Mr. Choudhury fled Bangladesh despite having had the opportunity? Because, he says, “if I leave I will be proved to be a coward … I want to fight the matter to the last.” Many of Mr. Choudhury’s colleagues have fled the country, but Mr. Choudhury, a practicing Muslim, wants to live free in his own country and beat the case set against him. “There is no pride, no honor, and no dignity in retreating,” he says.

Mr. Choudhury’s pre-trial run hasn’t been easy. He spent 17 months between 2003 and 2005 in prison without trial. Just this year he’s been attacked twice. In July, his office was bombed and in October he was assailed in person. Both times the police did nothing. But he has received support from some quarters of Bangladeshi society. The “Bangladesh Minority Lawyer’s Association” has been especially supportive. He said there are “many good Muslims who are silently expressing solidarity” but they fear repercussions from the radicals.

Fortunately, Mr. Choudhury has found a champion in Rep. Mark Kirk (R-IL). Rep. Kirk intervened in order to get Mr. Choudhury released from prison, but he still faces trial on the sedition charge.

The opinion of an American congressman does carry some weight. Bangladesh relies on the good will of the United States, not just because of $63 million in annual foreign aid, but also because of the low-tariff export of garments to this country, on which the Bangladeshi economy depends.

The State Department, for inscrutable State Department reasons, has not taken up the beleaguered editor’s cause. There’s no oil in Bangladesh. Are we worried about “stability” in South Asia? Or is it maybe a facet of multicultural outreach?

In any case, Bangladesh is poised on a razor’s edge. It could go the way of Somalia, and begin the steep drop into the 7th century that is the inevitable condition of Islamist polities.

Or it could become something else, something new: a modern Islamic country.

Pervez Musharraf is harassing Al Qaeda in Pakistan, and there are indications that the terrorist organization is moving to set up shop in Bangladesh. There are 150 million people in Bangladesh — half the population of the United States crammed into that tiny country — and almost all of them are poverty-stricken Muslims. It’s a real opportunity for the Great Jihad to recruit lots of new cannon fodder eager for the embrace of the 72 Black-Eyed Ones.

It’s also a great opportunity to show support for Muslims who oppose the radicals.

Here’s a man who is willing to put his life on the line for the sake of his principles. For moderation within Islam. For modernity.

What can we do to assist him?