Here is an article from today’s Aftenposten, kindly translated from the Norwegian by reader Mr. C:

King Gustav V of Sweden decorated Hitler’s henchman Hermann Göring with an order when the persecution of Jews was in full effect. He started a letter to Hitler in 1941 with the words “Mein lieber Reichskanzler!” [my dear Chancellor] 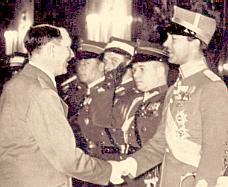 “Sweden was not a neutral country under WWII, never!”

In the book Mein lieber Reichskanzler! — titled after the king’s own words — former Expressen editor-in-chief Staffan Thorsell joins the growing number of people who question Swedish policy during the war.

“Depending on your point of view and mood, Sweden’s policy in the first years of war can be described as cowardly, careful, realistic or egoistic, but it was never neutral. ‘Intelligent adaptation’ was the tune of the times in the early 1940s, among diplomats, generals and politicians, but also among Swedish journalists. The truth is, you ducked in fear of the aggressive and racist superpower Germany, because that was considered wise and expedient,” Thorsell says.

In the book he describes close ties between the rulers and upper classes of the two countries. He starts off with a wedding in Koburg in October 1932, the first town to become nazified: Then Swedish presumptive heir Gustav Adolf marries princess Sibylla, daughter of grand duke Carl Eduard of Sachsen-Koburg. She would later become mother of present day king Carl XVI Gustaf.

“Carl XVI Gustaf’s maternal grandfather was one of nazism’s earliest supporters, Thorsell says,” but makes a point of not burdening today’s king with this.

The night of November 10th 1938 Anders Forshell, Swedish marine attaché in Berlin, had his sleep interrupted by window breaking and noise: It was the Kristallnacht, the night that became the start of ever grosser harassment of Jews.

In February the year after the Swedish king’s railway carriage and Gustav V rolled into a Berlin railway station. His majesty’s errand was to decorate Hitler’s general field marshal Hermann Göring with the Grand Cross of the Swedish Order of Swords, established by King Frederik I in 1748, awarded for “outstanding merit in time of war and for beneficial and long-lasting activity”.

Göring had a weakness for glitter and finery, but also for morphine way beyond medical use. When the German journalist in exile Kurt Singer wrote about this in the book Göring — Germany’s Most Dangerous Man, the Swedish government banned the book.

Has something in particular gripped you during your work?

“That Sweden didn’t do more for the Jews in the 1930s, while there was still time,” Thorsell says.

In the book he writes that Sweden in that period was one of the least hospitable countries to Jewish refugees, and that the immigration law of 1937 stated that they were not to be considered political refugees.

He points to the fact that Sweden and Switzerland, three weeks before Kristallnacht, persuaded Germany to stamp a 3 centimeter tall “J” in the passports of German Jews.

Thorell describes the enormous Swedish anxiety after April 9th 1940 (invasion of Norway), that the Germans might waltz over Sweden as well.

“That anxiety would mark Sweden for the rest of the war,” he says.

On April 17th 1940, a week after the invasion of Norway, Germany demanded to be allowed to send “a few railway carriages” with medical equipment, some food and nurses through Sweden to Narvik. The Swedes allowed it, but saw through their fingers the fact that “a few carriages” turned out to be 34 freight cars, mostly loaded with provisions for the army, and a passenger car with 40 young Germans from Bayern.

Later the Germans would issue more of these demands, and the Swedes solved the “problem” by letting single German railway cars attach to Swedish trains. After a while alcohol and cigars would be included in the cargo to cheer up the German fighters in the cold north.

“Sweden exported ball-bearings — parts necessary to keep the war machine going — to Germany until the autumn of 1944,” Thorsell says.

On the 17th of May (Norwegian Constitution Day). Norwegians in Stockholm were ordered not to celebrate the day in public; it was feared that Swedes would join the celebrations and that it could turn into a demonstration against the German attackers.

Another story concerns Sweden’s foreign minister Christian Günther, who banned the Norwegian president of parliament from broadcasting a radio speech from Stockholm after April 9th. The plan for the speech was detected by Berlin; Hitler’s propaganda minister Joseph Göbbels was furious, and pushed all he could. Which was enough.

The speech was instead recorded in Stockholm, and transmitted from London.

Part of the story is also that Norway probably had more to gain from the fact that Sweden was not in war than any other country, as it became a destination for thousands of Norwegian refugees.

“Towards the end of the war, Sweden went from ‘neutral’ to the allied,” Thorsell says.

When you piece these stories together — is there a danger that you, in sum, paint a picture which is too dark?

“That might be. But I want to change the mendacious view of a morally elevated neutrality which for too long has had power over Swedish foreign policy,” Thorsell says.

Update: LN — thanks for the correction. “Carl” was evidently a typo in Mr. C’s translation, and I was guessing as to what he meant. I’ve changed it.

41 thoughts on “Swedish Service to the Reich”